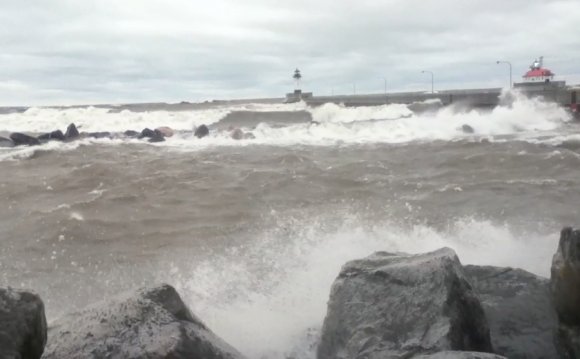 The sight and sounds of seagulls over relentless waves crashing against imposing cliffs and boulders. There is a deep sense of antiquity here. And awe. There are lighthouses and a sea as far as the horizon. The aroma of vast pine forests. White-tailed deer, bear and bald eagles are commonly seen. Wolves commonly see you. New England-like fishing villages. The steep-hilled, San Francisco-like ocean port of Duluth-Superior, with it's aquariums and shipping museums. The huge ships arriving, carrying cargos and grizzled men from far away places; seafaring men with amazing stories rarely shared with the land-lubbers who gaze at them with a profound curiosity matched by the deep waters themselves.

Duluth is the gateway to another world. Built on the wealth of earlier lumbering and iron ore mining, in more recent years it has reinvented itself for tourism. By far the most interesting place is Canal Park where the huge ships arrive and depart. They have to pass through the Aerial Lift Bridge (photo above). Their loud fog horns bellow as the bridge rises. There is a museum right there too, the Lake Superior Maritime Visitors Center . Not far away, you can tour the William A. Irvin ore boat. It is HUGE!! Take a Vista Harbor Cruise. Other attractions include the Great Lake Aquarium and Discovery Center, an Omnimax Theater, and the Lake Superior Zoo.

With its steep hills, Duluth itself is fascinating. For spectacular views take the Scenic Drive.

As you head northeasterly along the shore you will soon begin to enjoy the sense of Lake Superior's beauty and majesty. High cliffs and massive boulders catch the force of the waves. Twenty-two streams deliver clean, forest and mountain waters, to the big lake. There are many, many waterfalls, the greatest of which is Gooseberry Falls . It is easy to spend a day here hiking over the many miles of trails.

Speaking of hiking, the Superior Hiking Trail is a 205-mile long footpath that follows the rocky ridgeline above Lake Superior in northeastern Minnesota. It begins just north of Two Harbors, and ends just before the Canadian border. The trail has 30 trailheads and 81 backcountry campsites making it ideal for both day hikes and backpacking.

Two Harbors, Silver Bay, and Taconite Harbor are also important shipping ports along the way. Other attractions along the North Shore include The Depot Museum in Two Harbors, the North Shore Commercial Fishing Museum in Tofte, and Split Rock Lighthouse near Silver Bay. Few people live inland, for there are several state parks, expansive forests and government preserved land, such as the Lake Superior National Forest. The “Arrowhead” area of Minnesota also contains the most pristine land south of Alaska, the Boundary Waters Canoe Area. Few roads go there. One, the Gunflint Trail, leads into the deep pine woods out of Grand Marais.