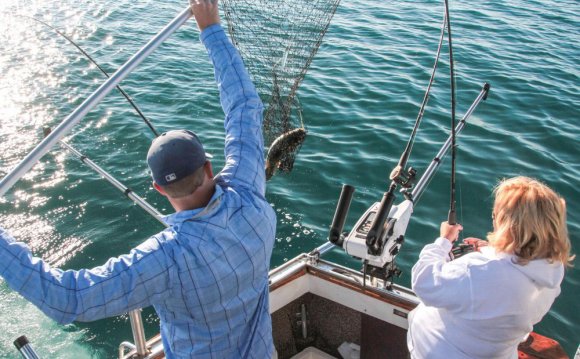 Chinook salmon studies: Two studies of Lake Huron chinook salmon are nearing completion. One looks into chinook life history, and stocking methodologies and stocking sites and their effects on post-stocking survival. The other investigates the incidence of reproduction of chinook salmon in Lake Huron. Both of these studies were funded by Federal Aid to Fish Restoration (link to FWS DJ page) and Michigan DNR license fees.

Chinook life history, stocking methods, and post-stocking survival - Chinook salmon spend relatively little time in their natal streams before migrating to Lake Huron. Egg deposition is in October and November. The eggs hatch during late winter and fry emerge from their gravel nests, known as redds, in late March and April. By mid-June the juvenile chinooks have grown to about 3 inches in length and begin "smolting", that is, their colors change to bright silver and they begin migrating to the lake. Chinook salmon only spend about 9 months (including the egg stage) in streams and are not present in Lake Huron's tributaries during the warmer summer months. Thus, it is likely chinook salmon are able to reproduce in streams that might be too warm for other trout and salmon.

Steelhead trout and coho salmon, for example, have a one- to two-year stream residency and thus must live in streams through the warmest summer months.

For a few weeks after entering the lake, chinook smolts inhabit the beach zone. We found high numbers of wild and recently stocked chinooks by seining after dark along sandy beaches of north and central Lake Huron. By June 15 most of the smolts appeared to have migrated off shore beyond the reach of beach seines.

During July through September we found young of year chinooks, ranging in size from 6 inches to 13 inches, near the surface in water depths of less than 50 feet. Stomach contents indicated the mainstay of the diet of these juvenile salmon was airborn insects, principally ants, bees, and flies. These young chinooks were most commonly found off points such as North Point of Thunder Bay and Tawas Point. We found both wild and hatchery chinooks were mingled at this point.

By late fall, young-of-year alewives and juvenile smelt appeared in chinook diets and chinooks remained dependent on fish for their diet thereafter. Yearling and older chinooks were found to be suspended between the surface and depths of well over 100 feet. The diet of these fish was principally alewives.