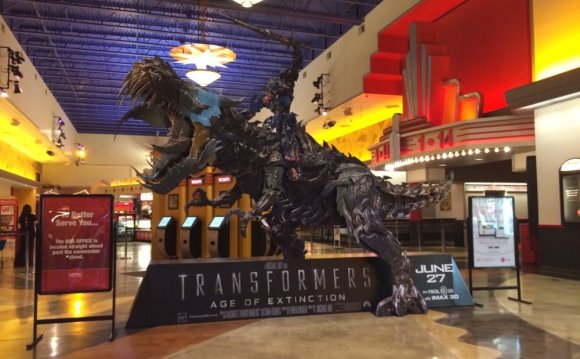 innovation and growth, announced today that following a 11-year vacancy, the site of the Showcase Cinemas at 2150 North Opdyke Road will be demolished beginning June 17 to make way for a new business park. The property, previously owned by National Amusement, was purchased in May by Novi-based Amson Dembs Development, Inc.

“Amson Dembs Development is pleased to take a prime site that has sat vacant for so many years and turn it into a high-end business park that will continue to fuel the economic development and growth of Auburn Hills, ” said Ryan Dembs, president of Amson Dembs Development. “This is our first development project in the City of Auburn Hills and we look forward to contributing to the energy and vitality of this community.”

Originally the site of the Blue Sky Drive-In, which began operation in 1948 with space for 700
cars, the theater later became part of the National Amusements chain. In 1989, Blue Sky was demolished to make way for the Showcase Cinemas Auburn Hills megaplex. Showcase Cinemas opened its doors on December 8, 1989 and closed in January 2002, as National Amusement shuttered a slew of its theaters due to an inability to keep pace with competition and amenities new theaters could afford. In Auburn Hills, the Showcase Cinema was not able to survive the popular Star Theatre (now AMC) at the nearby Great Lakes Crossing Outlets.

“This blockbuster project is generating a lot of buzz around town, ” said Steven Cohen, director of community development for the city of Auburn Hills. “Our community envisioned a beautifully landscaped high-tech park for that property since the day the theater closed 11 years ago. It’s great to see Amson Dembs Development demolish that vacant building and its ‘sea of parking’. By repurposing the land into a major job center, they’re helping make Auburn Hills’ vision for this site become a reality.”

Development of the approximately 21+ acre high-tech business park is expected to begin in July and take approximately 10 to 12 months to complete the first phase.