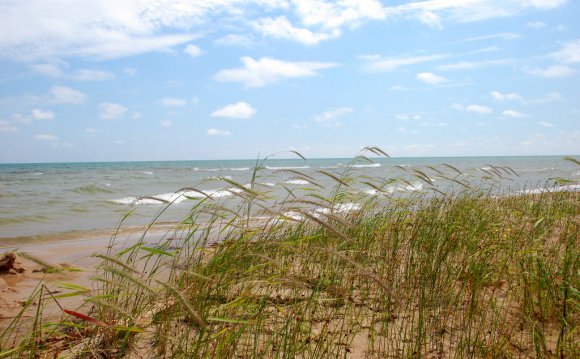 Beach fouling by algae is an unpleasant but common occurrence on Lake Huron shores.

Beach fouling by algae is an unwanted occurrence on the Great Lakes even though algae are an important element of the lake ecosystem. Algae convert sunlight into energy, providing a source of food for many other microscopic organisms that, in turn, are eaten by other fish and wildlife species.

Algal blooms that grow to nuisance proportions and foul beaches are responding to favourable growing conditions that vary by area and species of algae. To make sense of algae fouling problems and the ways that human activity contributes to favorable growth conditions (such as phosphorus pollution), it is important to understand the types of algae that have become unacceptably abundant and why.

Cladophora plants attach to the lakebed, forming lush lawns of filaments that are periodically detached by waves and wash ashore. Cladophora’s history as a nuisance dates back decades to when phosphorus discharges to the Great Lakes were less stringently managed. The Great Lakes Water Quality Agreement between Canada and the US prompted stricter control of phosphorus levels in detergents and domestic wastewater discharges. Phosphorus levels declined in Lake Ontario and Lake Erie as a result and the Cladophora problem waned through the 1980s.

Since the mid-1990s, however, Cladophora is again a widespread concern in these lakes but this time the cause is less obvious. In large part it appears to be related to ecosystem changes resulting from invasive zebra and quagga mussels. In more nutrient poor Lake Huron, Cladophora was not historically abundant and was found largely near areas of phosphorus inputs from the shoreline. The same holds true today with the added complication that, like elsewhere, Cladophora shows signs of being positively affected by zebra and quagga mussels.

Chara resembles a small aquatic plant. Freshly beached Chara has a forest-green colour that bleaches to yellow and white as it dries out. Beach fouling by Chara occurs erratically from spring to fall. It is suspected that periods of heavy Chara fouling are caused by strong winds and waves that uproot the plant and carry it to the beach. While the underlying reason Chara has become a problem remains unclear, its ecology suggests a preference for nutrient-poor conditions associated with good water quality.

Scientific studies so far in Lake Huron have not identified a link between nutrient enrichment and the abundance of Chara.

A third type of shore-fouling algae accumulates at the waterline over the summer. Known as ‘muck’, it is a mix of microscopic species dominated by diatoms – a group of algae noted for their brownish colour.

Significant scientific research on the growth of nuisance algae is underway and increasing across the Great Lakes. Along the Lake Huron shoreline, the Ontario Ministry of the Environment is continuing its research through watershed and nearshore water sampling to quantify the problem and identify sources. This work will help local communities and organizations focus their on-the-ground activities on projects that will minimize the growth of nuisance algae along Lake Huron’s shoreline.