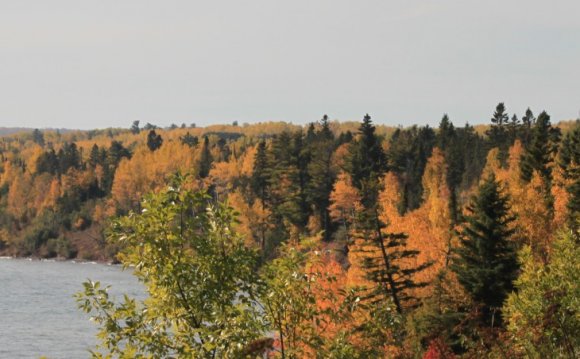 "According to a legend of the Chippewa tribe, the lake they once called Gitche Gumee 'never gives up her dead.'" - Great Lakes: The Cruelest Month, James R. Gaines with Jon Lowell in Detroit, ©1975 Newsweek Magazine

Thus began the Newsweek article in the issue of November 24, 1975. That lead and the news magazine's dry story inspired Gordon Lightfoot to write one of the greatest "story songs" ever.

On November 10, 1975, an ore carrier - the Edmund Fitzgerald - sank in Lake Superior during a November storm, taking the lives of all 29 crew members. Later that month, Gordon Lightfoot, inspired by that article in Newsweek Magazine, wrote what is probably his most famous song: Wreck Of The Edmund Fitzgerald.

Buy an MP3 of the original recording of the song:

Lightfoot wrote the song as a tribute to the ship, the sea, and the men who lost their lives that night. When asked recently what he thought his most significant contribution to music was, he said it was this song, which he often refers to as "The Wreck". In spite of its unlikely subject matter, the song climbed to #2 on the Billboard pop charts and remains one the most stirring topical ballads ever written, and a highlight of every Lightfoot concert. See the song lyrics below.

This year, 2015, marks the 40th anniversary of the shipwreck. Every year, on November 10th and the days leading up to it, there are commemorative services and other programs to remember the ship and the men who lost their lives. You can find information about some of this year's events at these websites: the Great Lakes Shipwreck Museum, the Lake Superior Marine Museum Association, the Dossin Great Lakes Museum (Detroit Historical Society), the Great Lakes Historical Society/National Museum of the Great Lakes and the Port Dover Harbour Museum (with "Dive Detective" Mike Fletcher and music - news article). There is also a memorial service at Mariners' Church as part of the 11am service on the preceding Sunday. In 2015 it is on November 8th: Church calendar.

Find the song on:

In 2010, Lightfoot changed one line in the lyrics of the song as a result of recent findings that it was waves and not crew error that lead to the shipwreck. He always felt bad that the line might have implied that the crew was at fault, and he was very happy that new evidence absolved them.

The line changed, and the new version, are:

Original version:
At seven PM, a main hatchway caved in; he said,
**2010 lyric change:
At seven PM, it grew dark, it was then he said,

To watch the TV documentary, originally broadcast by The History Channel, click here or on the image at the left (Amazon Instant Video, free with ads with Silverlight browser add-on, or you can purchase it without ads).

See the lyric change in context, and read the Toronto Sun news story about it (see below the lyrics).

Music and lyrics ©1976 by Gordon Lightfoot

The legend lives on from the Chippewa on down of the big lake they called "Gitche Gumee." The lake, it is said, never gives up her dead when the skies of November turn gloomy. With a load of iron ore twenty-six thousand tons more than the Edmund Fitzgerald weighed empty, that good ship and true was a bone to be chewed when the "Gales of November" came early. The ship was the pride of the American side coming back from some mill in Wisconsin. As the big freighters go, it was bigger than most with a crew and good captain well seasoned, concluding some terms with a couple of steel firms when they left fully loaded for Cleveland. And later that night when the ship's bell rang, could it be the north wind they'd been feelin'? The wind in the wires made a tattle-tale sound and a wave broke over the railing. And ev'ry man knew, as the captain did too 'twas the witch of November come stealin'. The dawn came late and the breakfast had to wait when the Gales of November came slashin'. When afternoon came it was freezin' rain in the face of a hurricane west wind. When suppertime came the old cook came on deck

"Fellas, it's bin good t'know ya!" The captain wired in he had water comin' in and the good ship and crew was in peril. And later that night when 'is lights went outta sight came the wreck of the Edmund Fitzgerald. Does any one know where the love of God goes when the waves turn the minutes to hours? The searchers all say they'd have made Whitefish Bay if they'd put fifteen more miles behind 'er. They might have split up or they might have capsized; they may have broke deep and took water. And all that remains is the faces and the names of the wives and the sons and the daughters. Lake Huron rolls, Superior sings in the rooms of her ice-water mansion. Old Michigan steams like a young man's dreams; the islands and bays are for sportsmen. And farther below Lake Ontario takes in what Lake Erie can send her, And the iron boats go as the mariners all know with the Gales of November remembered. In a musty old hall in Detroit they prayed, in the "Maritime Sailors' Cathedral." The church bell chimed 'til it rang twenty-nine times for each man on the Edmund Fitzgerald. The legend lives on from the Chippewa on down of the big lake they call "Gitche Gumee." "Superior, " they said, "never gives up her dead when the gales of November come early!" ** (Read Toronto Sun story).

Song: Wreck Of The Edmund Fitzgerald

Why Gordon Lightfoot’s Classic "Wreck of the Edmund ...

Gordon Lightfoot - The Wreck of the Edmund Fitzgerald

Gordon Lightfoot 8-31-12: The Wreck of the Edmund Fitzgerald