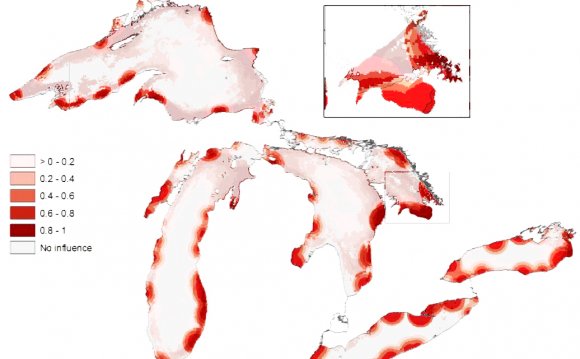 Polluted water was the greatest threat to public health in the Great Lakes this year. Lead contamination in Flint’s drinking water forced the city to declare a state of emergency in December, while blooms of toxic algae spread across Lake Erie and the Ohio River. Click image to enlarge.

By Codi Kozacek
Circle of Blue

Following one of the region’s most dire public health crises—the 2014 toxic algae bloom in Lake Erie that shut down water supplies for half a million people in Toledo—2015 was a stark illustration of the range and severity of water quality problems in the Great Lakes that threaten people and ecosystems.

The threats are widespread. Lake Erie experienced this summer its largest ever outbreak of toxic algae, while blooms of the same algae species stretched along more than 1, 000 kilometers (636 miles) of the Ohio River. In Flint, Michigan, researchers uncovered evidence that a switch in the city’s drinking water source is likely behind a spike in lead levels in the city’s children. The finding prompted a federal investigation of Michigan’s safe drinking water program. And in Wisconsin, a group of citizens asked the U.S. Environmental Protection Agency to intervene after years of what they see as a systematic failure and dismantling of state water protection programs.

The challenges to safe water in the Great Lakes come at a time when water resources are being promoted as key to the region’s economic growth and as federal money continues to pour into the region through the Great Lakes Restoration Initiative. Congress is set to maintain the initiative’s funding at $US 300 million next year. Private industries are also spending heavily, with Great Lakes shipping companies committing $US 7 billion to build new ships, improve port infrastructure, and update locks and breakwaters along the Great Lakes-St. Lawrence Seaway.

Leaders in the Great Lakes are quick to identify clean water as key to the region’s economic growth, and federal money continues to pour in through the Great Lakes Restoration Initiative. Click image to enlarge.

Government leaders took several key steps in 2015 to safeguard water supplies. Most notably, they agreed to tackle algae blooms in Lake Erie and to increase scrutiny of oil pipelines that cross the Great Lakes. But fundamental policy changes to protect water remain elusive, and several major projects to maintain the lakes’ health have stalled. More than a year after completing a study of ways to separate the Great Lakes from the Mississippi River Basin, the federal government is still relying on stopgap measures to halt the progression of invasive Asian carp, which could devastate native fish populations if the carp reach the Great Lakes. The U.S. and Canadian governments are also sitting on a proposed plan to restore coastal wetlands in Lake Ontario and the St. Lawrence River. The plan would increase the ebb and flow of water levels to mimic natural fluctuations.

Still, ensuring safe drinking water will be the defining challenge for the Great Lakes region next year. Flint’s lead-laden drinking water raised public alarm in much the same way as the Toledo algae bloom. Despite reconnecting to Detroit’s water system in October, the city still needs to update its aging infrastructure to fix the problem. The city’s mayor declared a state of emergency earlier this month in an effort to secure additional resources.

Plastic Pollution in the Great Lakes Scoping the Problem ...

Water Pollution of the Great Lakes