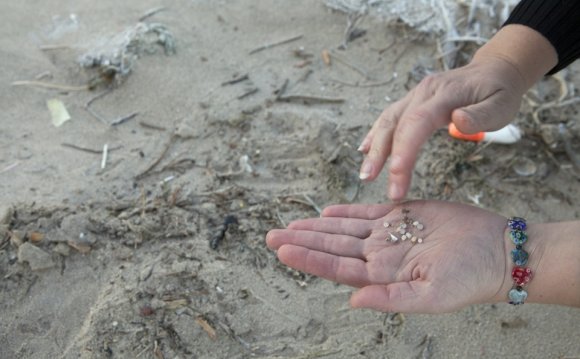 Everyone knows not to be a litter bug in theory, but it doesn't always make it into practice. A recent discovery in the Great Lakes is the latest example of previously unobserved trash in our ecosystem.

According to new research coming out of the National Meeting of the American Chemical Society, floating plastic debris, similar to the "Great Pacific Garbage Patch" has been found in the Great Lakes.

The pacific garbage patch is an area of trash in the Pacific Ocean that's estimated to be twice the size of Texas. The spot acts as a vortex of plastic particles and other pollutants that the currents have pushed together. The actual dimension varies because the garbage itself is often hard to see from satellites. The Pacific is not alone, there's also a garbage patch in the Southern Atlantic Ocean, and now the Great Lakes.

"The massive production of plastic and inadequate disposal has made plastic debris an important and constant pollutant on beaches and in oceans around the world, and the Great Lakes is not an exception, " Lorena M. Rios-Mendoza Ph.D., assistant professor of chemistry at the University of Wisconsin, said in a statement.

Similar to the Atlantic and Pacific garbage patches, much of the plastic pollution that Rios' team found in the Great Lakes area is impossible to seen by the naked eye because it is so small. In fact, from the samples her team collected from Lake Erie, a whopping 85 percent of the particles were smaller than two-tenths of an inch, and most of them were actually microscopic. According to the statement, Rios' team collected between 1, 500 and 1.7 million of these plastic particles per square mile.

A major concern for this problem is the impact it has on the wildlife in the area. Fish and birds are often harmed from accidentally eating these particles, and confusing the trash with sources of food. They also bring in the substances that dissolve into the water from the plastic particles. The researchers were able to do this by sampling the contents of the fishes' stomachs.

"The main problem with these plastic sizes is its accessibility to freshwater organisms that can be easily confused as natural food and the total surface area for adsorption of toxins and pseudo-estrogens increases significantly, " Rios said.