Sea lamprey in the Great Lakes 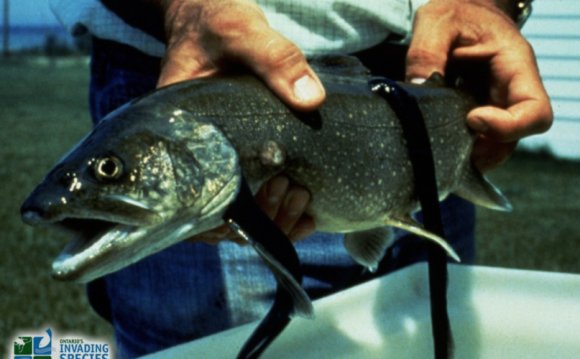 Sea lampreys (Petromyzon marinus) are parasitic fish native to the Atlantic Ocean. Sea lampreys, which parasitize other fish by sucking their blood and other body fluids, have remained largely unchanged for more than 340 million years and have survived through at least four major extinction events.

Sea lampreys are unique from many other fishes in that they do not have jaws or other bony structures, and instead possess a skeleton made of cartilage. While sea lampreys resemble eels, they are not related and are set apart by their unique mouth: a large oral sucking disk filled with sharp, horn-shaped teeth surrounding a razorsharp rasping tongue.

How do sea lampreys kill fish?

Sea lampreys attach to fish with their suction cup mouth then dig their teeth into flesh for grip. Once securely attached, sea lampreys rasp through the fish.s scales and skin with their sharp tongue. Sea lampreys feed on the fish.s body fluids by secreting an enzyme that prevents blood from clotting, similar to how a leech feeds off its host.

In their native Atlantic Ocean, thanks to co-evolution with fish there, sea lampreys are parasites that typically do not kill their host. In the Great Lakes, where no such co-evolutionary link exists, sea lampreys act as predators, with each individual capable of killing up to 40 pounds (18 kilograms) of fish over their 12-18 month feeding period.

Host fish in the Great Lakes are often unable to survive sea lamprey parasitism, either dying directly from an attack or from infections in the wound after an attack. Host fish that survive an attack often suffer from weight loss and a decline in health and condition.

Where are sea lampreys found?

The first recorded observation of a sea lamprey in the Great Lakes was in 1835 in Lake Ontario. Niagara Falls served as a natural barrier, confining sea lampreys to Lake Ontario and preventing them from entering the remaining four Great Lakes. However, in the late 1800s and early 1900s, improvements to the Welland Canal, which bypasses Niagara Falls and provides a shipping connection between Lakes Ontario and Erie, allowed sea lampreys access to the rest of the Great Lakes.

Within just a short time, sea lampreys spread throughout the system: into Lake Erie by 1921, Lakes Michigan and Huron by 1936 and 1937, and Lake Superior by 1938. Sea lampreys were able to thrive once they invaded the Great Lakes because of the availability of excellent spawning and larval habitat, an abundance of host fish, a lack of predators, and their high reproductive potential - a single female can produce as many as 100, 000 eggs!

What is the impact of the sea lamprey invasion?

Sea lampreys have had an enormous, negative impact on the Great Lakes fishery, inflicting considerable damage. Before the sea lamprey invasion, Canada and the United States harvested about 15 million pounds of lake trout in the upper Great Lakes each year. By the late 1940s, sea lamprey populations had exploded. They fed on large numbers of lake trout, lake whitefish, and ciscoes - fish that were the mainstays of a thriving Great Lakes fishery. By the early 1960s, the catch had dropped dramatically, to approximately 300, 000 pounds, about 2% of the previous average. During the time of highest sea lamprey abundance, up to 85% of fish that were not killed by sea lampreys were marked with sea lamprey attack wounds. The once thriving fisheries were devastated, and along with them, the hundreds of thousands of jobs related to the region.s economy.

What can be done about sea lampreys?

Sea Lamprey in the Great Lakes