Swimming in the Great Salt Lake 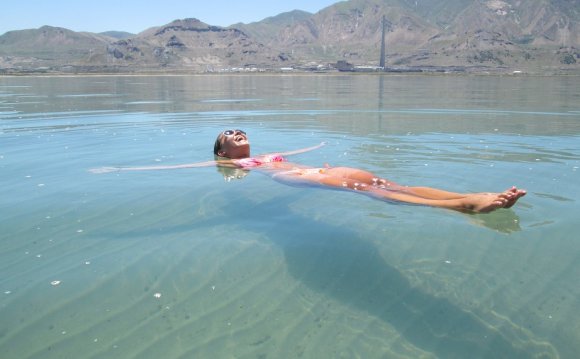 "We were all taken aback by the results, " says David Naftz, the U.S. Geological Survey hydrologist who headed the survey. Water samples exceeded federal mercury thresholds, and methylmercury — the element’s most toxic form — was found in some of the highest concentrations ever measured by the Geological Survey. The lake’s brine shrimp tested above mercury thresholds, as did the eared grebes that feed on the shrimp.

Because it lacks a sport fishery, the lake had previously escaped the scrutiny that’s led to fish-consumption warnings at places like Idaho’s Lake Coeur d’Alene. Were it a freshwater lake, Naftz says, "You can bet that the Great Salt Lake would have been studied for mercury."

The lake’s brackish nature could make it a "methylmercury factory, " he says. Its deep saltwater supports bacteria that convert mercury’s metallic form into methylmercury, which damages the central nervous system. That has some hunters worried about the health risks of eating ducks and geese that nosh on the mercury-laden brine shrimp.

But before it gets into the food chain, the mercury has to get into the lake. While scientists search for the mercury’s source, environmental groups are already pointing their fingers at a surprising suspect in north-central Nevada. There, they say, gold mines spew thousands of pounds of mercury into the wild.

Reeling in the mercury

In 1997, the Environmental Protection Agency inventoried the nation’s mercury sources, from coal-fired power plants all the way down to dental fillings from funeral home crematoriums. Gold mines weren’t included, though, says David Jones, associate director of waste management for the EPA’s southwest region: "We didn’t know they had mercury emissions."

But since the mid-1990s, the mining industry has used cyanide leaching and ore roasting to strip trace amounts of gold from ore. And those methods release large amounts of mercury into the atmosphere.

In 1998, the EPA started requiring mines to report mercury emissions. That year, Nevada gold mines accounted for 8 percent to 10 percent of the nation’s airborne mercury emissions, pumping an estimated 21, 000 pounds into the air.

In 2001, the EPA and the Nevada Division of Environmental Protection implemented a voluntary mercury-reduction program. They worked with the state’s five biggest gold mines, which account for almost all of its mining mercury: Barrick’s Goldstrike, Placer Dome’s Cortez, Queenstake’s Jerritt Canyon and Newmont’s Twin Creeks and Carlin South mines.

The voluntary program, Jones says, has been as effective as a mandatory program, and faster to implement. Today, Nevada mines account for about 3.5 percent of the nation’s total mercury.

Swimming at the lake