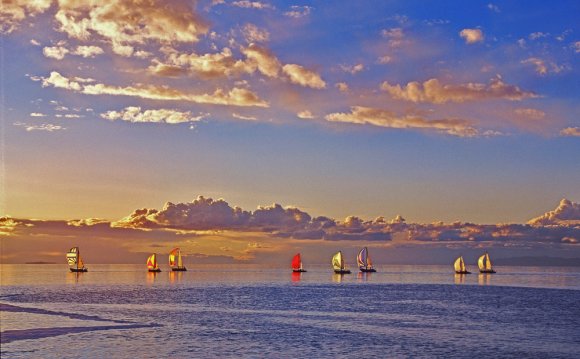 “One of the things Utahans are notorious for is not really paying attention to the lake, ” explains Greg Smoak, director of the American West Center and an associate professor of history at the University of Utah.

Perhaps because the Wasatch attracts a large percentage of outdoor recreation, the 2, 000-square mile lake 20 miles north of the downtown with its namesake is often overlooked. If most people miss the lake, then its islands aren’t even blips on the radar. How are a group of peak-dotted islands and a lake bigger than Delaware relatively ignored? The resounding reason, most sources say, is access. The Great Salt Lake and its islands are so close, but in many ways, so far away.
Author of the blog, “Summer of Salt: An Exploration of Great Salt Lake, ” and owner of ExploretheGreatSaltLake.com, Cindy Lund points to the nature of the lake itself and a shore lined with wetlands, mud flats, private land, and industry.

“The main part of the lake is about 13% salt, about four times as salty as the ocean, she explains, adding, “The railroad causeway cuts across the northwest portion, which is saturated at 23%. East of that is Bear River Bay and it’s also cut off—one of the tributaries to that bay is almost fresh water. Farmington Bay is between Antelope Island and mainland; and also because of the causeway, it is close to the ocean in its salinity.”

Southern Pacific Railroad built a railway from the mountains of West Desert to Promontory Point and then to Ogden. It separates Gunnison Bay in the lake’s northwest corner, called the North Arm, and Gilbert Bay in what’s called the South Arm. Bear River Bay in the northeast corner of the lake receives most of the fresh water inflow, making it suitable for fish.

The road between Syracuse and Antelope Island similarly slices the eastern part of the lake, creating a border between Gilbert Bay and Farmington Bay.

The two causeways effectively limit each bay from mixing with its neighbor, which results in dramatically different salinities. This directly affects the ecology of each bay, and indirectly, public access to the islands within them. For example, because Bear River Bay stays mostly fresh and full of fish, it is a feeding ground for one of the largest pelican populations. The pelicans nest on Gunnison Island, an area so remote in the North Arm that it’s virtually free from predation. As a result, the area is a restricted, wildlife management area.

Since the Beehive State has pretty much unmatched proximity to any kind of outdoor recreation, wouldn’t it be a welcome challenge to experience a hard-to-reach place that’s almost certainly devoid of people and full of very unusual history and wildlife?

“As far as adventure goes, you can go out and paddle around some of these islands, ” say Cindy Lund. “Understand with Gunnison Island, the pelicans are so sensitive that they will not come back if something disturbs them. It’s very precious that no one goes out there.”