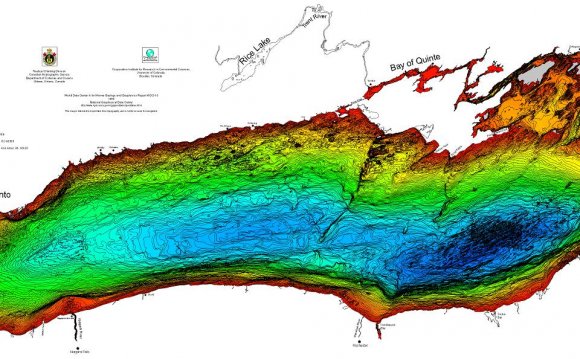 The now-submerged Mackinac Channel was first described by University of Michigan Professor George M. Stanley (1938) using U. S. Army Corps of Engineers Lake Survey sounding sheets and some early bathymetric contours. Stanley was among the first to recognize that significant post-Wisconsin lowering of water levels in both Lake Michigan and Lake Huron occurred, with drainage to the sea occurring through an isostatically-depressed valley in the North Bay area; and that the lowstand in Lake Michigan (Lake Chippewa) was at a slightly higher water level than that in Lake Huron (Lake Stanley), with drainage of Lake Michigan occurring through the Mackinac Channel. The name given to the lowstand in Lake Huron honors Professor Stanley. Hough (1955) referred to this channel in the Straits of Mackinac as the Mackinac River, but in keeping with accepted principles of applying terminology to water-covered topographic features, we refer to it as the Mackinac Channel. Sediment cores from Lake Michigan provided compelling evidence for an early post-Wisconsin low lake level (Hough, 1955). Further confirmation was obtained that the Mackinac Channel was a subaerial river channel when spruce stumps, rooted and in the growth position, were discovered at 35-40m depth in the Straits of Mackinac. Radiocarbon dates from these stumps range from 9780 +/- 330 ybp to 8150 +/- 300 ybp; stumps at a depth of 9m dated 6788 +/- 250 ybp and 6500 +/- 70 ybp have also been recovered from nearby localities (Somers, 1969; Crane and Griffin, 1972; Lowdon and Blake, 1978). This new bathymetry provides an integrated view of the Mackinac Channel and the adjoining lakefloor topography.

Least channel depths of about 35m occur NW of Waugoshance Point, and at a point north of Garden Island, where the main channel crosses what may be fall lines formed by resistant bedrock. A line of ridges, probably bedrock ridges, extends through this area striking mostly E-W and flanking the main channel. To the east, this presumed resistant bedrock lineation is on strike with remnants of the resistant Mackinac Breccia of lower Devonian age, which crop out on Saint Helena Island and on the peninsula just north of the Straits of Mackinac. Less resistant shales of the Late Silurian Salina Group underlie the Mackinac Breccia.

An arcuate ridge so named because it is partly underlain by glacial till of the same name, the Two Rivers Ridge is presumed to be site of an end moraine marking the outer limits of the last readvance of glacier ice (Two Rivers) extending this far south in the lake. Till deposits associated with the Two Rivers readvance underlie the ridge and also crop out on the Wisconsin shore in the vicinity of the town of Two Rivers, Wisconsin (Lineback and Gross, 1974). A foundation of bedrock apparently underlies this ridge, probably composed of resistant middle Devonian carbonates (Thwaites, 1949; Wold, 1980; Lineback and Gross, 1974), which have been stripped away by glacial erosion from the deeper basin to the north. The bedrock core of this ridge with its north-facing relief probably stalled the readvance of the Two Rivers ice lobe and ultimately determined the position of the end moraine. Farther north a smaller ridge extends across the deepest basin of the lake between Door County, Wisconsin and Leelanau County, Michigan.

This ridge is also arcuate, convex to the south, favoring the suggestion that it, too, marks the position of an end moraine associated with a minor, even younger, readvance of the retreating Lake Michigan ice lobe.

The largest and deepest basin of Lake Michigan, the Chippewa Basin extends northward from the Two Rivers Ridge almost to the outflow point of the now-submerged Mackinac Channel. It is so named because it is the main site of the former Lake Chippewa. Depths in excess of 275m, deepest of Lake Michigan, are reached near the southern end of this basin, where a large segment of the floor of Lake Michigan extends below sea level. Bedrock geology of the Chippewa Basin probably consists of a dip slope of resistant Silurian dolomites forming the western boundary, with the deeper eastern two-thirds of the basin having been eroded in less resistant upper Silurian redbeds (see Emery, 1950; Wold, 1980). Evaporites occur within the upper Silurian section (see Landes, et al., 1945), and dissolution of these evaporites may have contributed to the collapse and stripping away of the overlying Devonian strata. North-south trending ridges on the floor of the basin may coincide with erosional remnants of moderately resistant strata within the upper Silurian section. Escarpments forming the eastern boundary of the Chippewa Basin probably are underlain by the eroded edges of the resistant Devonian carbonates. Whereas the main Chippewa Basin may have been eroded in less resistant upper Silurian strata, the smaller South Chippewa was probably eroded mostly in upper Devonian shales, with a dip slope on the west formed partly on more resistant middle Devonian limestones (Thwaites, 1949; Foster, et al., 1991). Depths in this smaller basin do not extend below sea level (maximum depth in excess of 165m), but this basin was deep enough to contain lake water even during the lowest lake levels of the Chippewa lowstand.