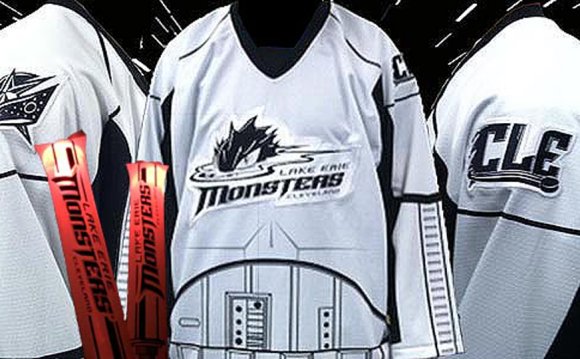 Cleveland's Lake Erie Monsters of the American Hockey League announced today they have reached a new National Hockey League affiliation agreement with the Columbus Blue Jackets. Monsters President, Kerry Bubolz and Blue Jackets President of Hockey Operations John Davidson announced the partnership which will see the Monsters operate as the Blue Jackets top developmental affiliate. The multi-year agreement between the NHL and AHL teams' will begin with the 2015-2016 season.

"Cleveland's Lake Erie Monsters are very excited to be a part of this new affiliation partnership with the Columbus Blue Jackets, " said Bubolz. "Having this AHL-NHL connection in the state of Ohio will be great for the Monsters and Blue Jackets organizations, co-partners such as Fox Sports Ohio and all of the great hockey fans in the state. We look forward to this unique kinship with the Blue Jackets hockey operations staff, coaches, players and business team, both on and off the ice in Cleveland and Columbus."

"The Blue Jackets couldn't be more excited and proud to have the Lake Erie Monsters as our American Hockey League affiliate, " said Davidson. "Both organizations are committed to winning and providing a great experience for hockey fans and we believe Cleveland, whose hockey roots date to the late-1920s, is the perfect place for our young players to grow, develop and have great success. Our sport has grown tremendously throughout the state of Ohio in recent years and we believe this partnership between two great hockey markets will allow us to continue that growth."

The Monsters are owned by Dan Gilbert and Cavaliers Hockey Holdings, LLC and play their home games at Quicken Loans Arena, along with the National Basketball Association's Cleveland Cavaliers and Arena Football League's Cleveland Gladiators. The 2015-16 season will be the Monsters' ninth as a member of the American Hockey League with the club having served as the AHL affiliate of the Colorado Avalanche over the past eight seasons since the team moved to Cleveland for the start of the 2007-08 AHL season.