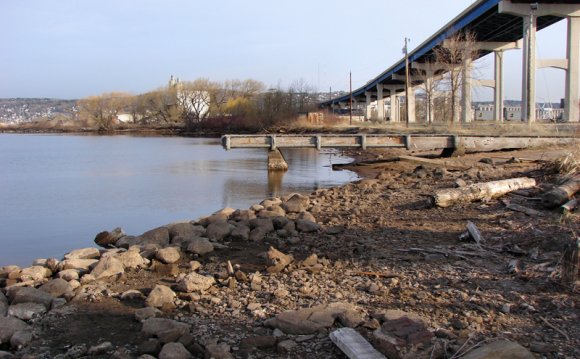 While people in the drought-stricken western United States watch lake and reservoir levels relentlessly plunge, the three largest of the Great Lakes have recorded one of the most rapid increases in water levels on record, according to a new analysis.

The quick turnaround – about two feet for Lake Superior and three feet for Lakes Michigan and Huron between January 2013 and December 2014 – ended what researchers have called an unprecedented 15-year period when lake levels fell below their long-term average.

The turnaround suggests that global warming's impact on the nation's fourth seacoast may be more complicated than implied in past projections, which pointed to a long-term decline in water levels, notes Richard Rood, a scientist at the University of Michigan in Ann Arbor whose research focuses on climate and adaptation and who did not take part in the analysis.

Recent research points to a more complex picture, he says, one less clear on whether lake levels will increase, decrease, or remain relatively stable. Instead, the focus is expanding to include the potential for extreme swings in lake levels.

The rate at which water levels in the three lakes have risen is nothing short of remarkable, notes the team that performed the analysis, whose lead author is Andrew Gronewold, a researcher at the National Oceanic and Atmospheric Administration's Great Lakes Environmental Research Laboratory in Ann Arbor.

Although the analysis includes three lakes found on standard maps, Lakes Michigan and Huron are considered one lake from a long-term hydrological perspective, the researchers note.

For Superior, the increase marked the largest two-year, January-to-December increase on record, with near or above-average increases recorded for almost every month during the period.

For Michigan-Huron, the increase fell just short of a three-foot increase recorded between January 1950 and December 1951. The Michigan-Huron system not only recorded above-average increases in the late spring and summer both years, but the system saw unusually large increases in September and October 2014, an unusual time of year for increases.

Lake levels have gone through dramatic changes in the past, Dr. Gronewold notes, but the 15-year decline and its two-year turnaround appear to be different.

In the past, changes in lake levels were closely tied to precipitation patterns, with little overall change to evaporation rates, he says. The recent recovery would seem to be no different. Precipitation in the region has run about 10 percent above average during each of the last two years.

In the fall and early winter, water levels decline as colder, drier air comes in contact with the warmer lake water, leading to evaporation.

But the region also experienced two bitterly cold winters, thanks to a persistent pattern in the jet stream that allowed frigid Arctic air to plummet south into the eastern half of the continental US, a pattern that was centered over the Great Lakes. Ice built up, covering ever-larger expanses of the lakes to near-record extents, preventing evaporation.

Ironically, where pockets of open water existed, "evaporation rates were through the roof" because if the unusually sharp temperature contrast that remained between the extremely dry, chilled air and the water, Gronewold says.

Unlike past swings in lake levels, the changes over the past 17 years have occurred as a result of a more complex interplay between ice cover, air temperature, water temperature, and evaporation, he says.

The 17-year period of extremes began with a record El Niño event in the tropical Pacific and ended with back-to-back years when the polar jet stream weakened sufficiently to allow bitter Arctic air to linger over large swaths of the eastern US – a pattern that several climate scientists say they have tied to the impact of global warming on the Arctic's summer sea ice.

As a result, Gronewold says, these changes appear to be more closely tied to "drivers of regional change that are connected to the larger climate picture that are possibly causing things to happen in the Great Lakes that haven't happened in the past."

Lake Superior is still polluted and sending us a message.