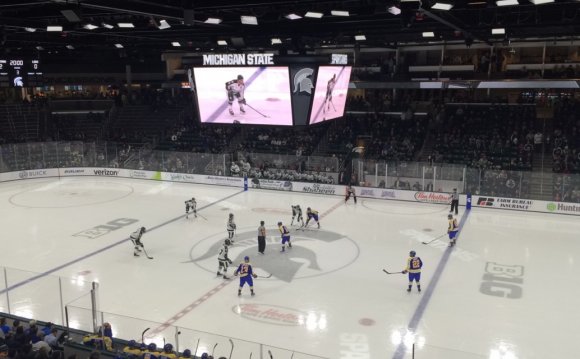 Lake Superior State University is a personal, small-town school that provides a superior blend of liberal and technical studies in Michigan’s Upper Peninsula. LSSU offers undergraduate degrees in 45 areas of study that attract students from every county in Michigan, more than a dozen states and provinces, and nine nations. LSSU is Michigan’s most personal public university emphasizing an undergraduate experience provided by a fully-qualified faculty and a dedicated staff.

After the 1783 Treaty of Paris ended the American Revolution, there were many disputes between the United States and Great Britain concerning the boundary lines of the Great Lakes. Those hostilities were apparent during the War of 1812 when disputes began over the border within the Saint Mary’s River, which covered sixty miles of waterway. War broke out amongst the US and British fleets and armies stationed along the common borders. On December 24, 1814, President John Madison’s administration reached a formal agreement for peaceful determination of the boundary.

In the summer of 1822 a battalion of the Second United States Regiment arrived under the command of then-Colonel Hugh Brady. Under his direction, construction began on what would ultimately become Fort Brady. He first took over the former Nolin house and began the erection of a stockade, with blockhouses at the southwest and northeast corners. Pickets twelve feet high set four feet in the ground enclosed the principal buildings of the post in a solid stockade. Fort Brady was completed before the close of 1822 and stood on that location until 1892 when it was moved to Easterday Hill.

Fort Brady was very important in the life of Sault Ste. Marie, occupying 26.14 acres extending 550 feet along the bank of the river and running parallel to Portage Street. The fort had a large garden, a cemetery, and a grove of large trees lying south of Portage. The main entrance was located on Portage Street, where a sentry with a rifle would pace back and forth.

This military installation underwent many changes and its troops served in several wars during its storied history. Fort Brady was moved to Easterday Hill around 1894. During that same period, Fort Mackinac was closed and Fort Brady became the only fort in Northern Michigan still in operation. The soldiers and supplies from Mackinac were diverted to Sault Ste. Marie.

In 1898 2, 000 troops were stationed at Fort Brady for military training before being sent to Cuba for the Spanish-American War.

During World War II 20, 000 troops were stationed at Fort Brady. A tent city was built and temporary wooden structures were constructed to serve as various warehouses, shops and offices. A heavy security fence was placed around the fort and access was limited to one main gate.

At the close of WWII, Fort Brady was placed in inactive status. In the latter part of 1945 troops were moved out from the fort, causing a drastic decline of the Sault Ste. Marie population. The locks and canal were now under the protection of the National Guard, activated in the Sault in 1894.

Fort Brady was sold to the State of Michigan for the Mining and Technology College in 1946.

Established in 1946 to address the needs of returning World War II veterans and to provide educational opportunities to the people of the Eastern Upper Peninsula, Lake Superior State University still embodies the essence of the early days. A personal education in a safe and friendly environment remains a hallmark of today’s LSSU.

After the fort was deactivated and thanks to the efforts of local volunteers and leadership at Michigan College of Mining & Technology (MCMT) in Houghton, the learning institution opened in the fall of that year as the Sault Ste. Marie Residence Center of MCMT. The Sault Branch was rechristened Lake Superior State College of Michigan Technical University in 1966. Autonomy arrived for LSSC in 1970. University status was granted in 1987 to the state’s smallest public institution of higher learning. Enrollment has grown from the original class of 272 to more than 3, 400 students.

The 115-acre campus overlooks the Michigan and Ontario twin cities of Sault Ste Marie bringing education to an international level. In addition to delivering a first-class education to thousands of students each year, LSSU is also known for a few unique traditions.

The University continues its time-honored tradition of welcoming spring by burning a massive, paper snowman at high noon on the first day of Spring.

The first spring snowman burning was held in March 1971 by the Unicorn Hunters who were established in the same year. Traditionally it has been held on the first day of spring to bid good-bye to winter and welcome spring. The burning takes its inspiration from the Rose Sunday Festival in Weinheim-an-der-Bergstrasse, Germany.