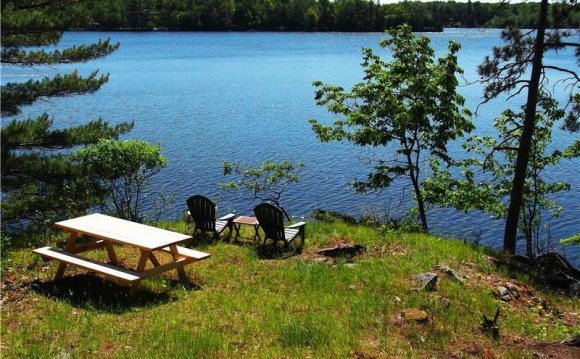 The 2014 bass season opens on Saturday, June 10 and runs through mid-December. The daily possession limit is six if you have a sport fishing licence and three with a conservation licence. The pike season begins May 10 with the same possession limits as bass. There is no closed season for panfish (bluegills, sunfish etc).

Recreational Fishing Licenses. These are required unless you are under 18, 65 or over, or disabled. The rules are different for non-Canadians, particulary seniors, so make sure you check! There are fees associated with these licenses.

The careful use of live bait-fish is not unlawful in most Ontario waters; however the remaining unused bait-fish must not be released alive. It is illegal to introduce any fish from one body of water to another without a permit. This is true even for minnows, as they may be a different species that what is already in the lake, and could damage the local lake ecology.

Anglers should empty their bait buckets on land before leaving any body of water. Some drain their minnow bucket on shore and freeze the excess for another day. An even better option is for anglers to catch their own bait from the lake they will be fishing.

Invading species such as the ruffe, rudd, round goby and rusty crayfish threaten the health of Ontario's aquatic ecosystems. It is illegal to use gobies, ruffe or rudd for bait.

Fishing Off Shore from Private Property

Navigable watercourses that have legal access points are open to the public for boating. Ontario's fish resources are managed by the government for the benefit of the public and are not the property of individual landowners.

Property owners have the right to use their property without unusual interference. They should expect a reasonable amount of boating and fishing activity near their lakefront dwelling, but should not have to deal with someone to fishing just beyond their shoreline for long periods of time.

Otty’s bass population has been in jeopardy. Over the past few years, the number of adult fish (2 pounds and above) has significantly declined. There are two causes of this. First, it is possible that a decade ago, the lake experienced a series of poor spawns. Second, the population has been subject to the over-harvesting of mature adult fish. This is the segment of the population that is the principal spawning source.

It takes a long time to grow an adult bass in Ontario. A three pound bass is at minimum, 7-8 years old. A five pound bass is well over 15 years old. Indiscriminate harvesting of mature fish will, in a short time, decimate a fishery in a small lake like Otty.

Please practice catch-and-release. If you want a fish dinner, consider harvesting some panfish like bluegills, sunfish and rock bass. They are far tastier than smallmouth or largemouth bass and their populations are at an all-time peak.