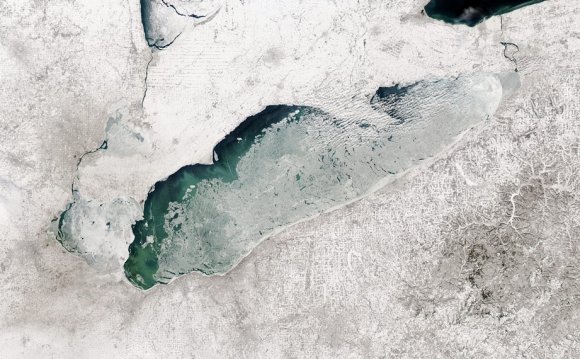 A car that was frozen by Lake Erie waters overnight was freed from a Hamburg, New York, parking lot on Jan. 13, 2016.

The car was taken to a garage to be thawed out.

A car that was frozen by Lake Erie waters overnight was freed from a Hamburg, New York, parking lot on Jan. 13, 2016.

The 2010 Mitsubishi Lancer had been stuck at the parking lot of Hoak's Lakeshore restaurant in Hamburg, New York, since Sunday night when 24-year-old Justin Yelen left the car behind because he had been drinking with friends that night, he told ABC News.

Yelen said when he left the restaurant around midnight, his car already had a thin coat of ice around it. The tires were stuck in puddles of water that had frozen over.

To Yelen's surprise the next morning, he found out on Facebook that a video showing his car coated in ice had been viewed over 10 million times.

A car off Route 5 in Buffalo froze over from waters from Lake Eerie Sunday night and Monday morning.

The 24-year-old's father, Joe Yelen, told ABC News on Tuesday that he had actually driven to the lot to try to get the car out, but waves on Monday and Tuesday from Lake Erie continued to splash over and freeze the car.

Justin Yelen, 24, found his car completely frozen from waters from Lake Erie in Hamburg, N.Y. Monday after he left it there overnight.

Joe Yelen said that despite all the trouble, he and his wife are happy their son left the car in the lot since he had been drinking that night.

Water from Lake Eerie froze over on the deck of Hoak's Lakeshore Restaurant in Hamburg, N.Y. Sunday night and Monday morning.