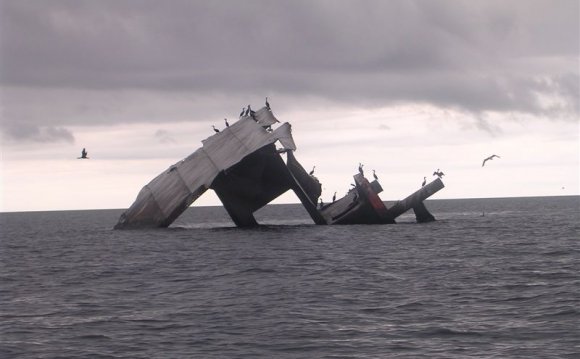 Lost in the lake: The wreckage of a wooden steamship that sank 152 years ago in a storm on Lake Huron with no survivors has been found, a Michigan explorer said

The Keystone State was heading from Detroit to Milwaukee when it sank during a powerful November storm, claiming 33 lives. According to some historians, the ship might have sunk with its crew while secretly hauling Civil War supplies, the newspaper reported.

'She literally sailed into oblivion. Nobody heard anything from her, ' Trotter told Reuters in a telephone interview. 'It's a great chance to touch history to swim back into time.'

The ship, which typically transported immigrants to the west and cargo east, left in hurry on its last voyage with no lifeboats aboard, he added.

'That adds to the mystery of her leaving, ' Trotter said.

X-marks the spot: The wreck was found in 175 feet of water 30 miles northeast of Harrisville, a small city north of Lansing. The location put the wreck about 50 miles off course

Steaming along: Although the one in this picture is not the actual steamer, the Keystone State was among a class known as palace steamers

The nearly 300-foot-long ship was built in Buffalo, New York It had paddle wheels on its sides nearly 40 feet in diameter. The ship was among a class known as palace steamers, according to maritime historian, author and artist Robert McGreevy.

'The interiors were made to look like the finest hotels. They were quite beautiful inside, ' he said. 'They had leaded glass windows and carved arches and mahogany trim.'

Maritime historian C. Patrick Labadie said the wreck's discovery can shed light on ship construction methods of the era and how people once traveled.

Sank without trace: The wooden steamer Keystone State that sank in 1861 in Lake Huron. No one knew it's whereabouts until Trotter and a crew of deep water divers found the ship using side scan sonar in June of 2013

The deep: With one of the two massive 40 foot tall side-wheels off to his right, diver Marty Lutz of Warren, Mich., explores in the deep waters of Lake Huron the wreckage of the Keystone State

'This one stands out, ' Labadie said. 'It's a unique wreck.'

Using a side-scan sonar device, Trotter and his team found the shipwreck the weekend after July 4. Crew members made 30 dives on the site from July through September. Divers shot video for DVDs that Trotter will sell online and use in presentations.

'The stern is kind of broken up and crumbled. The boilers are in good condition, the engine is in good condition, ' said diver Marty Lutz, 56, of Warren. 'The wheels are both standing. It was pretty amazing to see those sitting upright on the bottom like that.'