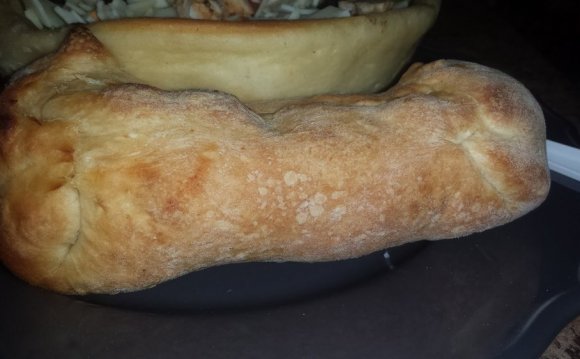 Grand Marais is the type of laid-back harbor town that embodies the word “vacation.” With its amazing beach and harbor, lakeside living vibe and cool local businesses, it’s definitely the sort of place you could go to de-stress for a while (and maybe never come back). The Lake Superior Brewing Co. is Grand Marais’ social hub.

It’s the sort of upscale dive bar where it almost seems like writing on the bathroom wall is encouraged. (Don’t worry, though. The graffiti says stuff like “We love Grand Marais!” and “Johnson’s Family trip to the U.P. 1997!”)

The décor in Lake Superior Brewing channels a 1970’s vibe, with wood tiled ceilings and a few stained glass lamps on the wall. The locals, tourists and staff here appear to all mix together just fine. They sort of have to, though, since it’s the only bar in town.

The beer is brewed on site, the wood fired pizza never disappoints and there always seems to be Van Morrison playing on the juke box. Aside from the excellent pizza, their garlic parmesan popcorn is a standout snack and the rest of the menu is pretty solid as well. I’ve had everything from burgers to fresh whitefish here and it’s always been good.

The first time my wife and visited this hub of the Grand Marais social scene, it was a gorgeous day in August, a small band was playing live music outside under a tent and the place was packed.

We were told it’d be “at least an hour, maybe two” wait for a table and that the pizza would be sold out soon. Not really having many other options, and also not being in any sort of a hurry (Grand Marais seems to do that do you) we decided to wait it out and just enjoy the scene.

About twenty minutes later, a table opened up. We ordered a beer sampler and a pizza (as luck would have it, we got the last one) and proceeded to hang out and people watch for a couple hours.

Then through their big picture window we watched an awesome August thunderstorm roll through, realized it was headed straight for our campsite at Blind Sucker #2 and high tailed it back to the site to put up the rain fly! (Next time we’ll probably camp at the very nearby Woodland Park Campground so we can hang out here all night, then walk a few feet and crawl into our tent!)

More recent visits have given me a better feel for the place, and now I like it even more.

On a recent camping trip with my stepson (when we camped at the Hurricane River campground) we made two stops into Lake Superior Brewing. One time we just popped in for a snack. He had their regular popcorn, which he dubbed “the best popcorn in the world.”

Later the next day, we returned for supper. Again, he had the popcorn and confirmed that it was “still the best popcorn in the world.” He had a small pepperoni pizza and I had a small Greek style pizza. They were both awesome.

And I can’t wait to go back.