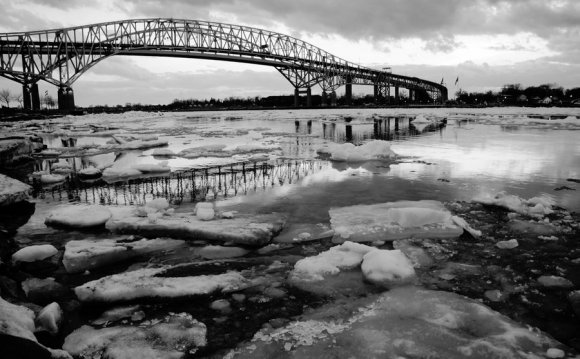 We go under Lake Huron to see how America’s paleo-Indian mastodon hunters lived and moved at the end of the Ice Age. Plus: new studies suggest that the Antarctic shelf is collapsing for good.

Nine thousand years ago, at the end of the last Ice Age, sea levels were 300 feet below where they stand today. You could walk from Europe to England. From Siberia to Alaska. You could walk across Lake Huron, in the American Great Lakes. And there, on what is now the lake floor, archaeologists are now finding amazing sites of human life in the age of sabre tooth tiger and mastodon. Preserved underwater. With the story of Paleo-Americans. The Paleo-Indians who hunted and moved across the land. This hour On Point: from the lake floor, Paleo-American life emerges.

John O’Shea, archaeological anthropologist at the University of Michigan. Head of the Great Lakes Archaeology Lab.

Discovery News: Ancient Caribou Hunting Site Found Beneath Lake Huron — “An elaborate array of linear stone lanes and V-shaped structures has been discovered on an underwater ridge in Lake Huron, marking what is thought to be the most complex set of ancient hunting structures ever found beneath the Great Lakes, according to a new report.”

Popular Archaeology: 9, 000-Year-Old Caribou Hunting Structure Found Submerged in Lake Huron — “More than the Drop 45 Drive Lane itself, the findings show an interrelated complex of drive lanes, multiple blinds and auxiliary structures that served together as an integrated system for controlling the prey into a kill zone. The findings, say the researchers, have implications for understanding the social and economic organization of the ancient hunters that used the AAR, as it required large groups of cooperating hunters and smaller groups of families to operate the system.”

Sea Rise And The Collapse Of The Antarctic Ice Shelf

Ben Strauss, vice president for climate impacts and director of the program on sea level rise at Climate Central.

Climate Central: What Does U.S. Look Like With 10 Feet of Sea Level Rise? — “More than half of the area of 40 large cities (population over 50, 000) is less than 10 feet above the high tide line, fromVirginia Beach and Miami (the largest affected), down toHoboken, N.J. (smallest). Twenty-seven of the cities are in Florida, where one-third of all current housing sits below the critical line — including 85 percent in Miami-Dade andBroward counties. Each of these counties is more threatened than any whole state outside of Florida – and each sits on bedrock filled with holes, rendering defense by seawalls or levees almost impossible.”