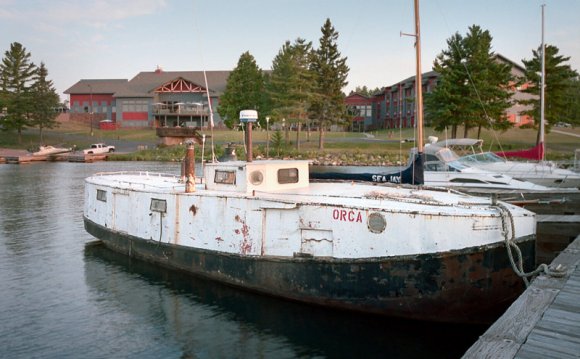 This content is written by Tom Goniea, Senior Fisheries Biologist.

Early History
A state-licensed commercial fishery has been a part of the Great Lakes fisheries management strategy since the first non-resident licenses were issued in 1865. Those early license requirements and fishing regulations were in place mainly to ensure that fees, taxes, and revenues generated from commercial fishing remained in the state coffers but were not established with the intention of protecting the resource (Brege and Kevern 1978). However, by 1929, the number of individuals generating income from commercial fishing numbered in the tens of thousands. This level of commercial use combined with advancements in technology including nylon gillnets and stream/gasoline engines necessitated more regulation. The first real commercial fishing law of substance in Michigan was enacted in 1929. The law required all persons commercially fishing Michigan's waters of the Great Lakes to be licensed and established minimum size limits for fish, season closures, and legal types of commercial fishing gear. The law also designated areas in the great lakes that were open and closed to commercial fishing.

While the new law required all participants in the commercial fishery to be licensed, there were no restrictions on the number of participants and thousands of licenses were issued annually. The early commercial fishery targeted all fish species of value and commonly harvested lake trout, walleye, yellow perch, lake herring, lake sturgeon, bloater chubs, and lake whitefish.

The fishery's emphasis in the Great Lakes began to evolve in the middle of the 20th century. Prior to the 1960s, the lakes were managed for the highest possible commercial production of any and all fish species of value, but decades of over fishing combined with the devastating effects of introduced species caused a biological and economic collapse of the state's native fish (Michigan DNR 1974; Dempsey 2001; Tody 2003). From 1960 to 1969, participation in the fishery dropped over 60% and while the remaining commercial fishing licenses continued to harvest roughly 22, 000, 000 total pounds of fish annually, the harvest was comprised of very different species than previous decades. Non-native species that had either been intentionally or accidently introduced to the Great Lakes comprised an increasing part of the commercial fishery until by the middle of the decade, smelt, alewife and common carp had become the top three species harvested. A change was on the horizon.


Commercial gillnet tugs at Leland's Fishtown in the 1930s.

The Rise of Recreation and Modern Commercial Fishery
The collapse of traditional commercial stocks of native fish, including lake trout, herring, sturgeon, and lake whitefish, coupled with an exploding invasive alewife population prompted Fisheries Division to revise Michigan's management strategy for the Great Lakes. In the late 1960s, Pacific coho and Chinook salmon were introduced into the Great Lakes in a desperate effort to control alewife populations. This strategy was an immediate success. Overnight adult salmon returning to coastal rivers and staging in the near shore areas of the Great Lakes created intense public demand for recreational opportunities. New interest from the general public in the Great Lakes led to user conflict over resource allocation and fishing grounds between commercial and recreational fishers.

In 1968, the Department requested and was granted statutory authority to institute a "limited entry" policy on the commercial fishery. Limited entry would effectively cap the maximum number of commercial fishing licenses available to only those licenses issued during the preceding year. Licenses were evaluated and those that had "full-time" fishing operations over the previous three years were grandfathered in and guaranteed annual renewal of their license from that point forward as long as they continued to meet the conditions of the law. The limited entry policy effectively prevented new commercial entries into the fishery unless the interested party could find a current commercial licensee willing to sell their license in the fishery. Limited entry had an immediate effect on effort and harvest when it was implemented in 1970. The number of commercial fishing licenses issued decreased from 339 in 1969 to 176 in 1970. The combined harvest was reduced to 16, 400, 000 pounds with alewife, channel catfish, carp, and lake whitefish constituting the bulk of the total.