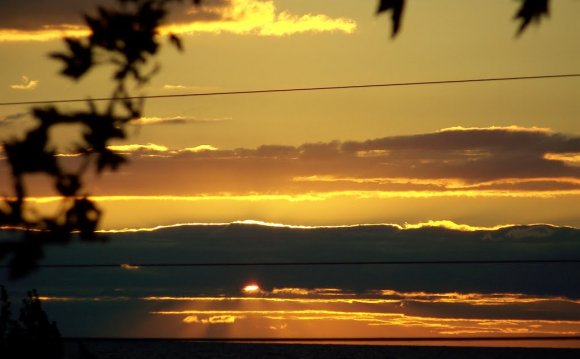 “Ashtabula County has the best sunsets in the world.”

This oft-stated opinion, which is a very subjective assessment, is often stated in conjunction with September and October skies over Lake Erie.

From Cleveland to Buffalo, the southern shoreline is naturally set up for sunset viewing as Helios appears to be swallowed by Lake Erie every evening. The orientation of sun and Lake Erie’s east-west axis thus sets the stage. The rest is up to weather, pollution and the Earth’s seasonal relationship to Sol.

Sunset colors occur because the blue part of the spectrum is a shortly wavelength than the reds and yellows. Short wave-length colors are more likely to be scattered by air molecules in our atmosphere. At sunrise and sunset, the light must travel a farther distance through the atmosphere than at mid-day, and in the process, more blue molecules are scattered and don’t reach our eyes, according to The Weather Channel.

In September and October, cold, clear Canadian air descends upon Lake Erie and northeast Ohio, purging the atmosphere of the humidity and particulates that block those sunset colors. The sunsets seem more brilliant, more intense, than they do at other times of the year, especially the summer months.

Nevertheless, the general weakness of summer’s celestial soirees does not stop visitors from doing some serious “sunset gazing” June through August. From the bluff at Conneaut Township Park to the beach at Geneva State Park, visitors set aside their picnics, bicycling, jogging, chatting and swimming to turn faces to the west and watch the sun paint the sky. Lenses of Smart Phones and DSLRs alike turn toward the sun in futile attempts to preserve the moment’s glory as digital files. Devoid of the musty smell, roaring surf and squawking gulls, the images seem lifeless when opened upon a computer or phone screen back home.

1. Take control of the exposure and dynamic range.

Helios, who makes all of our outdoor photography possible, is himself a challenging subject, for he is brighter than any other object on earth, and the limited dynamic range of both film and camera sensors make capturing both the sun and landscape details in one image an exercise in technical mastery. Get the exposure on the sunset right so the colors are preserved and the sky does not “wash out, ” and you will lose any detail in the foreground (or worse, the face of the person you tried to photograph standing in front of the sunset). Get the foreground exposure right, and the sunset turns into a white sky.

For people who insist on being photographed in front of a sunset, the solution is relatively simple: Use a flash to properly expose the faces while keeping the sunset properly exposed, as well. Many point-and-shoot cameras have this solution built into their automation. The solution fails rapidly, however, as the subject gets farther away, such as with groups of people. In that case, the solution is to use a much more powerful flash, something most amateur photographers are unlike to be willing to tote about while at the beach.

Also, because the “color” of the light from a flash is much colder than that of the sunset, the color balance is going to look weird and the people in your picture may look like they were “pasted into” the scene. A common solution that professionals use to address this imbalance is to put a color gel roughly the color of the sunset (such as CT orange filter) over the flash head.

If your camera has a RAW format option, you should use it for shooting sunsets and other scenes with a large range of tones. You’ll need special software (such as Adobe’s Lightroom) to unlock all the features that RAW offers, but by using RAW you can rescue images that are four to five stops underexposed, or smooth out the wide range of tones typical in a sunset scene.

2. Compose with the foreground in mind

The silhouette of person, tree, monument or other object in the foreground can greatly enhance the drama of the sunset.

For these situations, using the camera’s suggested exposure is likely to give you the best photo. But don’t be afraid to try an image that is 1 stop over exposed and one stop under exposed by switching to manual exposure mode on your camera. One the three settings (under, normal and over) is likely to give you an interpretation of the scene as you saw it. It is at that point that photography begins to become especially personal, so don’t be content with the way the camera interprets the scene. Learn the controls on your camera and how they can affect you photograph.

3. Use a slow shutter speed on moving objects

Bracing the camera and dragging the shutter for a second or more as the sunset reflects from a moving object can create a feel of motion and add mood to an otherwise mundane scene. Consider this long exposures of the Lake Erie waves.

4. Don’t quit when the sun is gone

For 10 to 15 minutes after the sunset disappears, the landscape is bathed in the afterglow, some of the most beautiful light of the day. Put a fast lens on your camera or crank up the ISO setting and capture this fleeting light’s magic.

There’s no question that Ashtabula County’s shoreline offers some great sunsets, but most digital photographers like to fine-tune images so they represent the image they felt, not necessarily what the camera saw.

To that end, photo editing programs can be used to enhance color balance, saturation and depth.

You can start the process in the camera by manually adjusting your white balance to fool the camera. Try setting the camera to “cloudy” as a starting point. For warmer colors, still, move the setting toward “shady.”