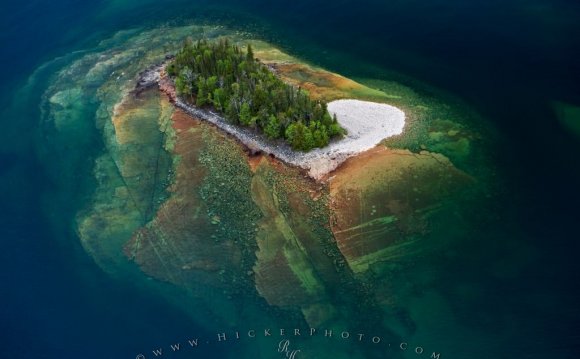 Photographer Shawn Malone captured this Fata Morgana of an ore boat on Lake Superior on May 22, 2015 in Marquette, Michigan.

MARQUETTE, Mich. (WOOD/MEDIA GENERAL) — Standing alone along the beaches of Lake Superior, it’d be hard not to question your sanity. A view of an ethereal ghost ship is sliding across the water. It looks supernatural. In reality, it’s science – a stunning image better known as Fata Morgana.

This example of a Fata Morgana was taken by Shawn Malone, of, on Friday, May 22, 2015 in Marquette, Michigan, looking over Lake Superior.

A Fata Morgana is a superior mirage that consists of multiple images. They usually stack high into the air in a distorted fashion.

How do they form?

Events like this are rare, but usually happen from mid-April to mid-June. The phenomenon can happen any time of day, but weather conditions must be perfect. The atmosphere must be very stable and feature clear skies, little wind and warm temperatures near the surface of the water.

The lake still is quite cold in late spring, but air temperatures are approaching summer levels. Mirages are most likely to form when very warm air slides over the cold water and the wind stays calm. This forms an “inversion” over the lake. The change in air density bends light waves and creates the mirage.

Several reports and pictures of mirages already have popped up earlier this year when a large area of high pressure and warm air moved into west Michigan. The Chicago skyline and a set of sand dunes were captured in mirage form, among others.

The term Fata Morgana is named after the sorceress Morgan Le Fay, fabled half-sister to King Arthur, who was known as a shape changer.

Matt Jaworowski, of the Media General National Desk, contributed to this story.

WOOD TV8 provides commenting to allow for constructive discussion on the stories we cover. In order to comment here, you acknowledge you have read and agreed to our Terms of Service. Commenters who violate these terms, including use of vulgar language or racial slurs, will be banned. Please be respectful of the opinions of others. If you see an inappropriate comment, please flag it for our moderators to review.