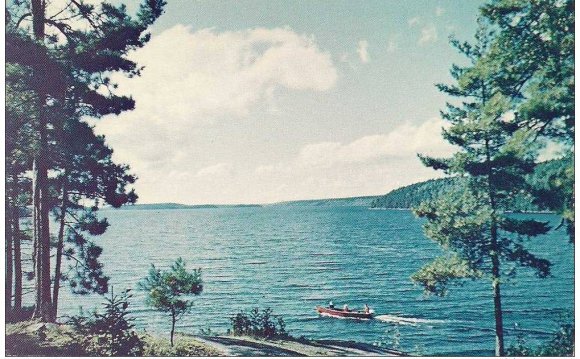 Two-foot rollers gently lifted the stern of our canoe as we paddled out into the sprawling expanse of Basswood Lake, an iconic lake on the Minnesota-Ontario border in the heart of the Boundary Waters Canoe Area Wilderness and Quetico Provincial Park. Together, these two wilderness areas protect over two million acres of interconnected lakes and rivers formed by the last ice age.

We were traveling through a paddler’s paradise, surging forward in a rhythmic motion with every passing wave. Every few minutes a larger set swept under us, a gentle reminder that we were walking a fine line between the perfect tailwind pushing us east at four miles an hour and the slightly larger waves that would form if the winds increased, which would force us to shore to wait for the wind to subside.

Two days before, we had left the Voyageur Outward Bound School on the Kawishiwi River on a 100-day journey by canoe and sailboat to Washington D.C. Several sulfide ore mines are being proposed on the edge of the Boundary Waters, including the Twin Metals Mine, which is a stone’s throw from Outward Bound’s base and the edge of the wilderness area. We are worried about the threats these mines bring to the Boundary Waters, so we are spreading the word about what a special place it is—one paddle stroke at a time.

We paddled down the Kawishiwi River and a series of lakes into the Boundary Waters Canoe Area Wilderness, following the path that pollution from the Twin Metals Mine would take to Basswood Lake. From Basswood Lake we would turn east and follow the chain of lakes that forms the international border for 140 miles to Grand Portage on Lake Superior to complete the first leg of our 2, 000-mile journey. But before leaving Basswood, we would pause to visit an old friend.

As we neared the east end of Basswood Lake we ducked into a small, nondescript bay. Sheltered from the wind we could relax and rest. At the base of the protected cove we climbed out of the canoe and walked into the cool dark forest. From the water the trees looked normal, but after walking a few feet into the woods we came to the massive trunk of one of the oldest trees in the Boundary Waters. This 700- to 1, 100-year-old cedar is five feet in diameter, but it is no taller than its neighbors that all look to be much younger.

Standing at its base, touching its thick, gnarled bark, I wondered about the countless windstorms and forest fires it had survived—and the people who had stopped to marvel at its massive trunk and rested in the cool shade at its base over the centuries. How many more generations of people and changes to the landscape will this tree witness? We left an offering of tobacco at its base and after a moment of reflection, continued on our journey.

A Dene elder in the Northwest Territories once explained to me that when you travel by dog team or canoe you see every rock and every tree—the land speaks to you. Listening to the land as I explore wild places has made me realize the importance of being a voice for the land as well. After all, it can be hard to hear the ancient cedars and rushing streams when caught up in the hustle and bustle of our busy lives.