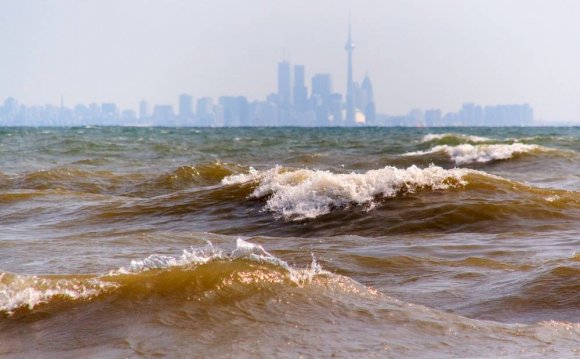 'Jellification': A researcher holds up a scoop of the jello-like scum produced by a type of plankton which has multiplied rapidly thanks to industrial processes

After-effects: A decline in calcium, caused by effects like acid rain, killed off competitors and allowed the scum-producing Holopedium gibberum to expand

Researchers - who pictured themselves scooping gelatinous handfuls of the scum out of the lakes - said they found calcium levels in the earth by the lakes had plummeted in recent decades.

Chemical waste from factories - spread by weather phenomena like acid rain - can eat away at minerals usually present in soil, causing profound changes to the animals and plants that live nearby.

According to the researchers - a mixture of government scientists and academics from the universities of Cambridge and Ottawa - populations of the plankton which produce the substance has doubled since the 1980s.

It has corresponded with a decline in the calcium levels in surrounding soil, which began with the rise of industry in the 1850s, but picked up significantly in the late 20th Century.

Once-pristine: The jello-like layer is covering lakes in Canada. Pictured is a body of water in Muskoka

The lakes used to be full of a different species of plankton - called Daphnia - which had lived there for centuries and thrived on the calcium which made its way into the water from surrounding soil.

The tiny animal needed the calcium to build a thick exo-skeleton that stopped it from getting eaten by midges - but when the deposits started to run out they struggled to survive.

While populations declined, the Holopedium gibberum - which doesn't need as much calcium - began to thrive instead.

Their defensive mechanism is to surround themselves with a jello-like scum, which is now spreading over the lake.

Invader: The Holopedium gibberum is producing the 'jelly' substance as a defense against predators

As well as contributing to the 'jellification' effect, falling calcium levels could have a knock-on effect on public health, as these nutrients can make their way up the food chain into humans. The water could also become less safe to use.