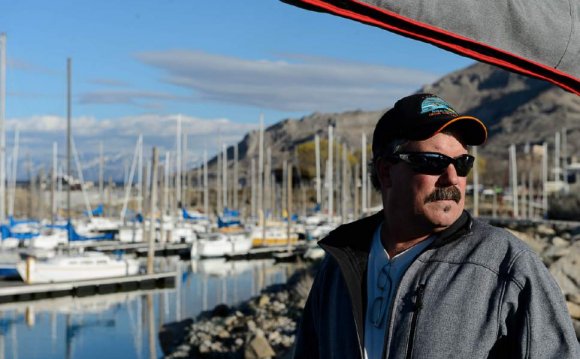 The first non-native to view the Great Salt Lake was most likely Jim Bridger in 1824 (who thought it was part of the Pacific Ocean) although there is debatable evidence that either French Canadian immigrant Etienne Provost or former Danish sea captain John H Weber may have visited the Lake as early as 1823 while trapping. The Spanish missionary explorers Fathers Dominguez and Escalante learned of the Great Salt Lake from the Native Americans in 1776, but they never actually saw it getting no closer than Utah Lake forty miles to the south. There was some thought that the lake might be an arm of the Pacific Ocean until James Clyman and three others circumnavigated the lake in 1826 using a “bull boat” which was most likely a type of skin canoe. Interestingly enough, map makers persisted in drawing imaginary rivers draining to the Pacific Ocean for years to come.

John C. Freemont, Kit Carson and three others explored the lake using an eighteen foot India rubber and canvas boat in 1843. Their explorations included Freemont Island where Carson carved a cross on a rock outcropping which is still visible.

Captain Howard Stansbury, accompanied by J. W. Gunnison, arrived by order of the United States Government in 1849 to survey the lake. They had a yawl constructed which was launched April 3, 1850. Two islands in the lake bear their names. The triangulation station they constructed on Antelope Island remains there to this day. Their boat was named “The Salicornia” or “Flower of the Salt Lake” but was generally called “Sally”.

By the 1860’s, a variety of steam and sailing boats were being used on the lake. In 1854, the largest boat at the time was commissioned by Brigham Young and launched by Dan Jones. The “Timely Gull” was a 45 foot stern wheeler which was converted to sail in 1856 and destroyed in a storm about 1860. Other boats of the time include the “Star of the West”, a fifty foot schooner, the “Lavon”, the “Pioneer”, a schooner, the “Plubastah” a steamship, “Hope”, also a fifty foot schooner, “Maude”, the “Cambria”, the “Augusta”, “Lilly of the Lake”, “Old Bob”, a cattle boat, and two boats named “Lady of the Lake”, the first being a fifty foot schooner and the other a thirty foot steamer.

To the right is a photograph of the schooner “Lady of the Lake” owned by the Miller brothers and used to transport sheep and cattle to Antelope Island. Built around 1859.

Other large boats included the “Kate Connor”, the “Rosie Brown”, the “Susie Riter”, and the “City of Corrine” later renamed the “Garfield”, a seventy foot, three hundred ton stern wheeler which burned in the 1880’s. The wreckage of nearly all these boats still is found scattered about the shores of the lake.

To the left is the “City of Corrine”, later renamed “General Garfield”, leaving the pier at blackrock.

The Great Salt Lake Yacht Club was originally established on May 10, 1877 with Captain David Lazarus Davis as Commodore. Members included all crew of the vessels: “Waterwitch”, “Petrel”, “Mary Askey”, and an unnamed boat belonging to a Mr. Hudson.

In 1878, a fifth vessel and crew joined the Yacht Club, the “America”. Two regattas complete with gold and silver cups were held in 1879. Various cruises and regattas were held throughout the 1880’s and 1890’s.

Interest in sailing had faded somewhat after the turn of the century, but had revived by 1925 after the original Saltair resort (built 1893) burned and was rebuilt on the original pilings. In 1929, the Great Salt Lake Yacht Club resumed operations under its original 1877 charter. In 1932, a $200 club house was opened beneath Saltair’s south pier, and the Yacht Club was legally incorporated. The Yacht Club has continued to operate under this 1932 incorporation and 1877 charter to the present day making the Yacht Club among the oldest in the nation.