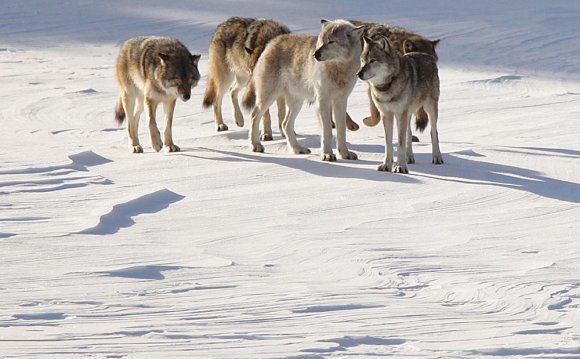 The beaver is part of the rodent family. They are large brown furry rodents with small eyes, small rounded ears, large orange teeth, and a large flat, scaly tail. They weigh between 44 to 60 pounds. Beavers are like lumberjacks. They will chew the base of a tree until it falls down. They love to eat the bark and leaves from the trees that they fell. Their favorite trees are aspens but they will also eat birch, alder, willow, and mountain maple. Beavers live in lodges that they build along the shore of a lake, river or stream. Lodges are made out of mud, grass and branches. The entrance to a beaver lodge is underwater. You can learn more about beavers in our Wilderness Library.

One of the few amphibians found near Lake Superior is the wood frog. Amphibians are cold-blooded animals like frogs, toads, newts and salamanders. Did you know that wood frogs are specially adapted for cold northern winters? Wood frogs can survive almost freezing in the wintertime. Their bodies create a natural antifreeze that allows them to survive while they hibernate in the winter. You can learn more about wood frogs in our Wilderness Library.

Birds are warm-blooded feathered animals that lay eggs. There are many types of birds found in and around Lake Superior. Some of the birds are cormorants, gulls, loons, osprey and bald eagles. Cormorants are large black sea birds. They can be found in the ocean and on freshwater lakes and rivers. They build stick nests in trees, on cliff edges and on the ground on islands. They usually can be found in large groups called colonies. Cormorants like to eat fish. You can learn more about cormorants in our Wilderness Library.

Dave’s Dilemma: Help us decide what equipment we need when we switch from sailing to canoeing.

Cast YOUR Vote: Help us figure out what to study as we begin to paddle the path of the voyageurs.