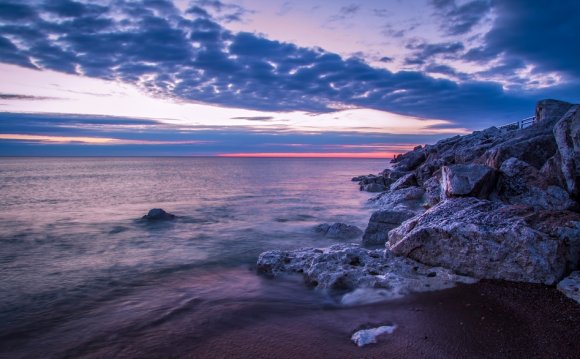 The Great Lakes are:

The Saint Lawrence Seaway and Great Lakes Waterway opened the Great Lakes to ocean-going vessels. However the move to wider ocean-going container ships - which do not fit through the locks on these routes - has limited shipping on the lakes. Despite their vast size, large sections of the Great Lakes freeze over in winter, and most shipping stops during that season. There are some icebreakers that operate on the lakes.

The lakes have an effect on weather in the region, known as lake effect. In winter, the moisture picked up by the prevailing winds from the west can produce very heavy snowfall, especially along lakeshores to the east such as Michigan, Ohio, Pennsylvania, Ontario, and New York. It is not uncommon for heavy snow to occur during completely clear skies because of this phenomenon. The lakes also moderate seasonal temperatures somewhat, by absorbing heat and cooling the air in summer, then slowly radiating that heat in autumn. This temperature buffering produces areas known as "fruit belts", where fruit typically grown farther south can be produced in commercial quantities.