Where is Lake Huron? 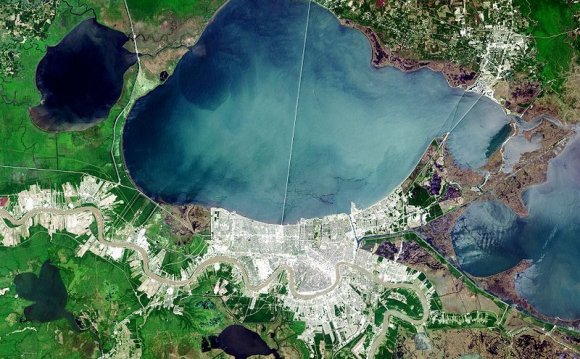 Lake Huron second largest of the Great Lakes of North America, bounded on the west by Michigan (U.S.) and on the north and east by Ontario (Can.). The lake is 206 mi (331 km) long from northwest to southeast, and its maximum width is 183 mi. The total area of its drainage basin is 51, 700 sq mi (133, 900 sq km), exclusive of the lake surface area, which is 23, 000 sq mi. Inflow into the lake is received from Lake Superior (via the St. Marys River), from Lake Michigan (via the Straits of Mackinac), and from numerous streams draining the adjacent lands. The lake discharges at its southern end into Lake Erie (via the St. Clair River, Lake St. Clair, and the Detroit River). With a mean surface height of 577 ft (176 m) above sea level, the lake reaches a maximum depth of 750 ft. Many islands lie in the northeastern part of the lake, notably Manitoulin Island and many others in Georgian Bay and the North Channel. Scenic Mackinac Island and several others are located near the Straits of Mackinac in the northwest part of the lake, and Saginaw Bay indents the Michigan coast.

Huron, Lake: frozen shorelineRod Planck—Tony Stone ImagesLumbering and fishing have been important economic activities in the Lake Huron region, and many resorts line the lake’s shores. As part of the St. Lawrence Seaway, the lake supports heavy commercial traffic in iron ore, grain, and limestone. The average navigation season extends from early April to late December. Large tonnages of limestone are loaded at Rockport and Rogers City, Mich. Other harbours important in local trade include Cheboygan, Alpena, Bay City, and Harbor Beach (in Michigan) and Collingwood, Midland, Tiffin, Port McNicoll, and Depot Harbor on Georgian Bay (in Ontario).

Lake Huron was the first of the Great Lakes to be seen by Europeans. The French explorers Samuel de Champlain and Étienne Brûlé travelled up the Ottawa and Mattawa rivers and reached Georgian Bay in 1615. Brûlé traversed the North Channel to the St. Marys River in 1618. A Jesuit mission was established among the Huron Indians at the Wye River (southeastern corner of Georgian Bay) in 1638 and named Sainte-Marie; but it was destroyed by the Iroquois Indians in 1649. After that, the centre of French activities shifted northwestward to the settlement at Sault Ste. Marie on the St. Marys River. Jacques Marquette, the French missionary and explorer, founded a mission at St. Ignace on the Straits of Mackinac in 1671.

Meanwhile, Louis Jolliet, the French-Canadian explorer, canoed down Lake Huron in 1669 before discovering Lake Erie. The French explorer Robert Cavelier, sieur de La Salle, sailing westward from Niagara, traversed Lake Huron in 1679. British penetration of the lower lakes developed strongly in the mid-18th century, leading to the British capture of Fort-Pontchartrain-du-Détroit (Ft. Detroit) in 1760 and Michilimackinac on the Straits of Mackinac (1761). The current boundary between the U.S. and Canada was drawn after the Revolutionary War (1775–83) and was firmly established after the War of 1812. In the latter war, the fort on (overlooking the Straits of Mackinac) was taken by the British, but U.S. troops reoccupied it at the close of the war. The lake was named by the French after the Huron Indians.

Where in the World is Matt Lauer (Tyler Arens) ? -Lake Huron