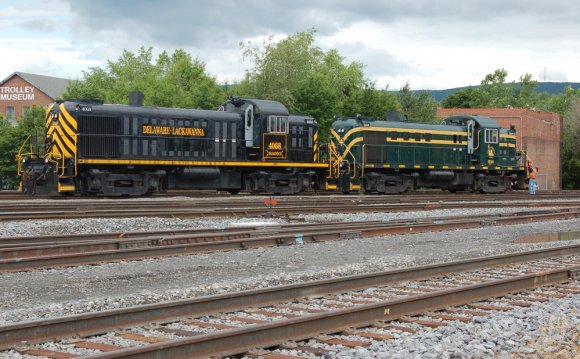 The construction of the New York and Erie Railroad started in 1835 at Deposit, New York and the first section completed was from Piermont to Goshen, in 1841. From Goshen the line was completed to Middletown by 1843, to Port Jervis by 1848, to Binghamton in 1849, and finally to Dunkirk in 1851. The New York and Lake Erie Railroad was the longest railroad in the country and also the widest at 6′ gauge. Other roads varied with a maximum of 4’8½”, standard gauge.

There were 2 reasons for the New York and Lake Erie being built at 6′ gauge. First, the Chief Engineer believed that traffic would be so dense and locomotives so heavy the 6’gauge would be necessary. Second, the charter granted by the State of New York contained a stipulation that the New York and Erie must never connect with any other railroad leading to any other State. The movement of traffic to the Port of New York would be controlled by an all New York railroad. In 1880 the entire mainline was converted to standard gauge in one day.

In 1951, the 100 year anniversary of the first train to run over entire line from Piermont, New York to Dunkirk, New York at Lake Erie was celebrated with much fanfare. Several excellent brochures were printed and given to passengers, stockholders and mailed to vendors which documents the history of the railroad. Many of these brochures contained history of the New York and Lake Erie Railroad written by Robert E. Woodruff, President of the Erie Railroad in 1945 titled,