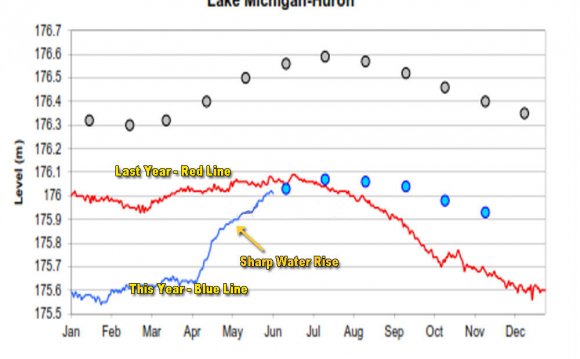 The Great Lakes have been rising over the last two years, putting an end to a decade of lower than average water levels, and creating favorable conditions for both boating and commercial shipping. In fact, scientists at the National Oceanic and Atmospheric Administration and the U.S. Army Corps of Engineers say water levels in lakes Superior, Huron, Michigan, Erie, and Ontario are all above seasonal averages for the first time in 16 years.

Drew Gronewold, a NOAA hydrologist at the Great Lakes Environmental Research Laboratory says that the rise in lake water levels can be attributed to record rainfall and runoff in the Great Lakes basin, as well as the almost complete ice cover during the winter which has inhibited evaporation.

"The monitors show 15 years of record low water levels at Superior, Michigan, and Huron are just coming to an end, " Gronewold said in a conference call this month announcing the lake level rises. "The surge started in January, 2013, and lakes Superior and Michigan have equaled or surpassed any water level gain on record for any other 23-month period."

Keith Kompoltowicz, chief of watershed hydrology for the Corps of Engineers Detroit District, says the lakes' water rise is "unprecedented" since they began taking measurements in 1918.

The lakes levels are monitored by 87 stations, 53 in the United States and 34 in Canada. According to these monitors, Lake Huron and Michigan are 3.2 feet higher than their low point and seven inches above their seasonal average. Lake Superior is up 2.3 feet above its January 2013 low point and Lake Erie is up 13 inches over its low point.

But all is not so great in the water-filled lakes. While boating and shipping might be rejoicing for the higher water levels, scientists are concerned with the potential for further erosion of the coasts of the Great Lakes. The higher water levels will reach parts of the coast not accustomed to the presence nor the water of the lakes, leading to the potential for erosion and the extension of coast lines if the water levels continue to rise.

Lake levels typically rise in the spring, with their peak in the summer months. However, Lake Erie's water levels declined for twelve consecutive months in 2012 and didn't rise until June 2013. The six month forecast shows Lake Erie is expected to remain five to eleven inches above its level just one year ago, and six to 8 inches above its long-term average.

The higher water levels have created perfect conditions for boating and commercial shipping, but it could come with a price. As the waters continue to push deeper up the coastlines, erosion could wear away the already familiar coasts and change the landscape as we know it.

A resurgence in water levels a welcome sign for Lake Huron ...