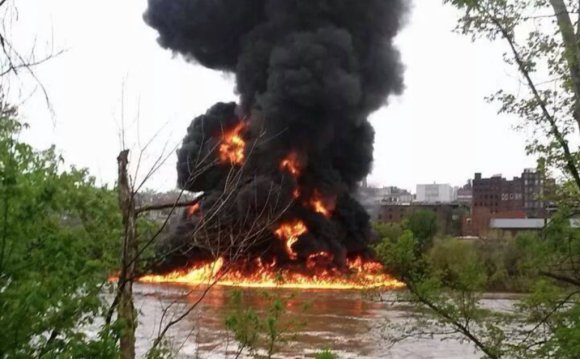 The Cuyahoga River, "the river that caught fire"

A river catches fire, so polluted that its waters have “no visible life, not even low forms such as leeches and sludge worms.” This could describe the mythological River Styx from Hades. Residents of Cleveland, though, may recognize the government’s assessment of their own Cuyahoga River in 1969. While hard to imagine today, discharging raw sewage and pollution into our harbors and rivers has been common practice for most of the nation’s history, with devastating results. By the late 1960s, Lake Erie had become so polluted that Time magazine described it as dead. Bacteria levels in the Hudson River were 170 times above the safe limit.

I can attest to the state of the Charles River in Boston. While sailing in the 1970s, I capsized and had to be treated by a dermatologist for rashes caused by contact with the germ-laden waters. You can see the poor state of our waters for yourself in the iconic 1971 “Crying Indian” commercial.

In 1972, a landmark law reversed the course of this filthy tide. Today, four decades later, the Clean Water Act stands as one of the great success stories of environmental law. Supported by Republicans and Democrats alike, the act took a completely new approach to environmental protection. The law flatly stated there would be no discharge of pollutants from a point source (a pipe or ditch) into navigable waters without a permit. No more open sewers dumping crud into the local stream or bay. Permits would be issued by environmental officials and require the installation of the best available pollution-control technologies.

The waste flushed down drains and toilets needed a different approach, so the Clean Water Act provided for billions of dollars in grants to construct and upgrade publicly owned sewage-treatment works around the nation. To protect the lands that filter and purify water as it flows by, permits were also required for draining and filling wetlands.

Protecting our nation’s waters may seem like common sense today, but the idea of nationally uniform, tough standards against polluters was both original and radical. Thinking big, the Clean Water Act’s preamble declared that the nation’s waters would be swimmable and fishable within a decade, with no discharges of pollutants within a dozen years. These weren’t idle boasts.

Remember a similarly bold claim in 1960 that the nation would land a man on the moon and return him safely within a decade? This was an age of technological optimism. Water pollution posed a national threat, and a national mission was necessary to turn back and clean the tide.

By many measures, the Clean Water Act has fulfilled the ambition of its drafters. The sewage discharges that were commonplace in the 1960s are rare. The number of waters meeting quality goals has roughly doubled. Once a convenient dumping ground for all manner of filth, rivers now represent an urban gem. Hartford, Conn.; Kansas City, Kan.; Cleveland; and other cities have based much of their redevelopment around their now clean and inviting waters, with waterfront parks and the lure of fishing and trails along the water’s edge.

Sailing on the Charles River is no longer a hazardous pursuit, and thanks to a new treatment plant, the rejuvenated Boston Harbor is once more home to herring, porpoises, and seals. More people have access to safe drinking water from their taps than ever before.

But the glass is only half full, for major challenges remain. The EPA estimates that about half of our rivers and streams, one-third of lakes and ponds, and two-thirds of bays and estuaries are “impaired waters, ” in many cases not clean enough for fishing and swimming. These are big numbers. Given the successes described above, how has the Clean Water Act done so poorly despite doing so well?

Much of the answer lies in the law’s narrow focus. We have made great progress in controlling industrial pipes that discharge waste, but other major sources remain largely unregulated. To gain sufficient congressional support from farm states in 1972, the Clean Water Act largely exempted runoff from agricultural fields and irrigation ditches. As a result, pesticides, manure, and other pollutants have flowed into streams, rivers, and eventually lakes and bays. To take the most frightening consequence, the Mississippi River basin, draining one-third of the country, empties nutrient-laden waters into the Gulf of Mexico. There, the aptly named “Dead Zone” regularly grows to 6, 000 square miles or more, suffocating sea life that cannot swim away from its oxygen-starved waters. Storm-water runoff with oil and trash also threatens water quality around urban areas.

These “nonpoint” sources can be addressed, but they require enhanced authority to regulate farm practices and major funds to overhaul storm-water infrastructure. Neither seems an easy option in an era of a divided Congress and tight budgets.