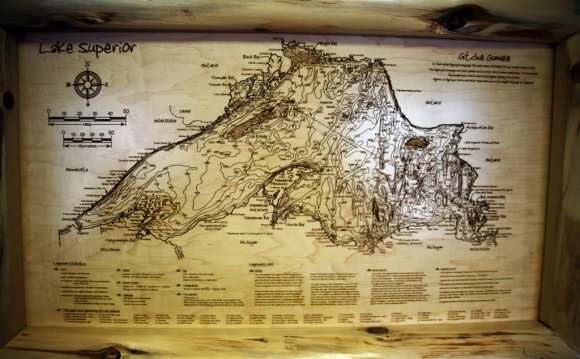 The siscowet Salvelinus namaycush is a deepwater morphotype of lake trout in Lake Superior. As part of a standardized lake-wide survey in 2006 to assess siscowet populations, bottom-set, multi-mesh gill nets were fished at 36.6 m depth intervals from near shore areas to the deepest waters in south-central Lake Superior. Siscowet length distributions, diet compositions, and sea lamprey wounding rates were compared for three depth zones: shallow (< 200 m), deep (200–394 m), and deepest (395–399 m). There were 39 siscowets collected in proximity to Lake Superior's greatest recorded depth of 405 m. To our knowledge, this is the greatest depth that fish have been collected in the Great Lakes. Higher proportions of siscowets ≤ 500 mm were caught in the shallow zone compared to deeper zones. Deepwater sculpins were the dominant prey for small siscowets (< 600 mm) across all depth zones. The diet of large siscowets (≥ 600 mm) among all depth zones comprised mostly of coregonines and burbot Lota lota. Terrestrial insects were observed in the diet of siscowets in all depth zones, indicating migration to the surface. Type A sea lamprey wounding rates were higher for large (≥ 600 mm) than small siscowets among all depth zones. The highest wounding rate was observed on large siscowets in the deep zone. Recent work indicates that siscowets are the most abundant lake trout form and this research indicates that siscowets use the maximum depths of Lake Superior.