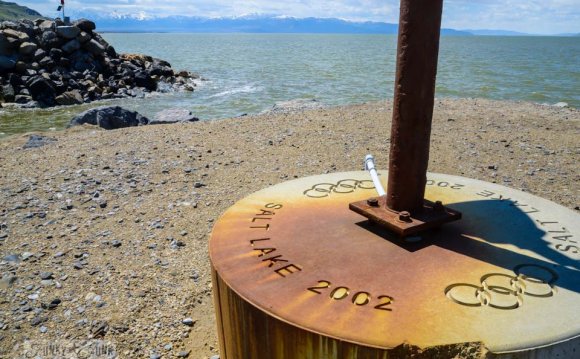 Illinois is a basin too, by the way, but it's open on one side, so when the sea levels went back down, all that water sloshed back into the ocean instead of evaporating and leaving salt.

Really? There’s a giant salt mine under Detroit?

Well, it's more than 300 acres — YES, under Detroit — and it's been in operation for more than a hundred years.

The Detroit Salt Company wouldn't let me interview anybody (what that was about, I never did find out), and they don't hardly let anybody down there, primarily for safety reasons I'm told.

But I found someone who'd been there a time or two: Dr. Ed Van Hees, an economic geologist who works at Wayne State University in Detroit.

He says if you head south from downtown Detroit on I-75, you'll come to a huge bridge near a steel plant. Look to your right. “If you know what you're looking for, it's easy to see, ” says Van Hees. “The most obvious thing is this huge pile of salt.”

To get to the mine, hop in an elevator (called the "shaft") and ride straight down almost 1, 200 feet. The John Hancock Building isn't quite that tall, by the way, and if you've ridden the elevator there, well, that's about how fast you'll be headed down. (“You're trying to get people to go to work, ” says Van Hees. “You're not diddling — dallying around.”)

You get off in a room with 32-foot ceilings. There are trucks around and the mine spreads out in a kind of checkerboard pattern; when they carve out a "room" of salt, they leave a 50-square-foot pillar to hold up the ceiling.

“The air is dry, ” Van Hees says. “You can taste the salt. The area that's currently being mined is fresh-looking, it's quite spectacularly white. It does have that ice-rink look to it.”

But it isn't exactly lit up like the Ice Capades. In fact, beyond the shaft — the room where the elevator lands — there are no lights at all.

Salt Mine Under Lake Erie Shut Down as Precaution