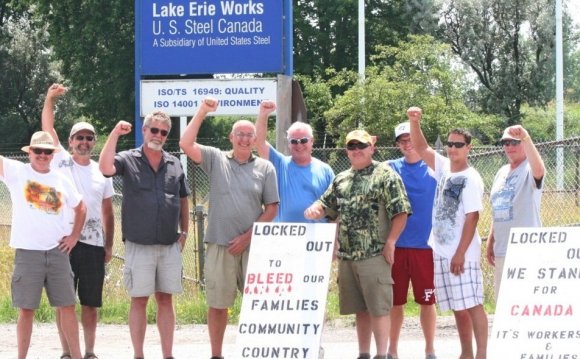 Nearly 1, 000 workers at U.S. Steel’s Lake Erie Works in Nanticoke, Ontario have been locked out since April 28.

U.S. Steel imposed the lockout—the second at the mill in three years—after the workers, members of United Steelworkers (USW) Local 8782, overwhelmingly rejected its demands for yet another round of contract concessions. The steel giant is pushing for a wage freeze, the elimination of cost-of-living increases, cuts to vacation, drug and other benefits, and the gutting of work rules, so as to enable it to temporarily redeploy skilled workers in other jobs at lower wage rates.

During the lockout, U.S. Steel is using production from other USW-organized facilities in Canada and the U.S. to fill its orders. When in operation, the Nanticoke facility accounts for about 10 percent of U.S. Steel’s total output.

Three years ago, U.S. Steel locked out the Nanticoke workers for eight months in an ultimately successful drive to impose a two-tier pension system. Workers at Hilton Works in Hamilton were locked out for almost a year in 2010-11. There the USW accepted a concessions-laden contract that froze wages, imposed a two-tier pension scheme, ended the inflation indexing of pensions, and slashed hundreds of jobs.

Some harsh realities find expression in signs on the picket line

As in the two earlier lockouts, the USW is isolating the Nanticoke workers, while instructing workers at other U.S. Steel mills to remain on the job.

Indeed, the union is allowing the company to continue to run part of its Nanticoke operations. While the vast majority of the USW members at the Lake Erie Works are locked out or on layoff, approximately 160-180 members of another USW bargaining unit are “pickling”—that is surface finishing ready-formed steel—shipped in from other US Steel facilities, including the Hilton Works, in nearby Hamilton. The “pickling” completed, the steel is being sent from the Nanticoke mill to customers in both countries.

Bowing to company threats, Local 8782 has posted a directive on its website urging the locked-out workers to “refrain from talking to any of our members during working hours including lunch because…they will be disciplined if caught.” This is accompanied by the text of a management letter that forbids those still working in the plant from having “any interactions (including conversations, phone calls, texting, etc.) with the Local 8782 picket line employees” during working hours.

While enforcing pro-employer labor laws and ordering US Steel Workers on both sides of the border to do work normally performed at the Nanticoke mill, the USW is promoting reactionary Canadian nationalism, so as to thwart any movement for a united struggle on the part of U.S. Steel and steel industry workers in North American and internationally against all concessions, job cuts and mill closures.

Accepting the company’s rationale that workers’ wages should be tied to investors’ profits, the USW District 6 and Local 8782 leaders argue that U.S. Steel’s labor costs at the Nanticoke plant are actually lower than at its U.S. mills. They have also accused U.S. Steel of “unfairly” distributing work within the company, to the detriment of its Canadian operations.

The reality is all workers at U.S. Steel and all working people in North America and around the world are facing a business offensive aimed at making them pay for the crisis of capitalism, through wage and job cuts and the destruction of all the social gains the working class made through the convulsive social struggles of the last century.

The World Socialist Web Site spoke late last week with locked-out workers picketing the Nanticoke plant. While the workers were determined to beat back the company’s concession demands, many expressed scant confidence in the union.

Jeff Badger and a co-worker manning the picket line

Jeff Badger, who has worked at U.S. Steel for two-and-a-half years as an electrician, said U.S. Steel’s concession demands had “left us no choice.”

“The sticking part of the contract, ” he explained, “was they had what’s called ‘broad banding.’ So if they don’t have work for you that you were hired for, they can give you work to do elsewhere in the plant, which is all fine and dandy—no one had a problem with that. The problem we have is that they stuck a little clause in there that says you’ll be paid according to the job class that you’re working in.