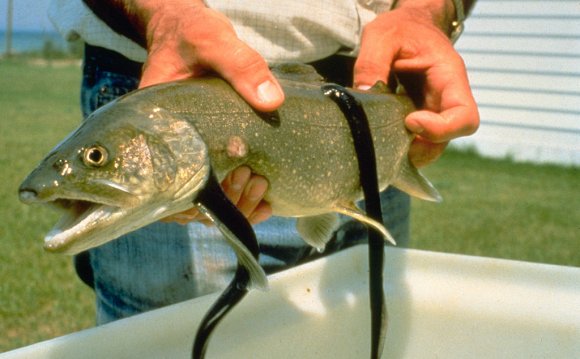 Sea lampreys are not native to Lake Superior. They are an invasive species. An “invasive species” is a plant or animal that has been introduced to an environment and become a nuisance. Sea lampreys came from the Atlantic Ocean, through the St. Lawrence Seaway. The sea lamprey is a parasite. It grows to be about 8-12 ounces. It is a grayish-black fish that is long and skinny. It has a round mouth that looks like a suction cup, with many rows of teeth. Sea lampreys are kind of like vampires. They latch onto other fish and suck their blood. You can learn more about the sea lamprey here, in the Wilderness Library.

Lake sturgeon are the largest fish in Lake Superior. They among the oldest fish in the lake too. Did you know that a lake sturgeon can live to be older than 100 years? This species of fish has also been around for a long time—about 150 million years. Lake sturgeon can grow to be 8 feet long and weigh over 300 pounds.

They have tough skin with hard plates running along each side of their body. They have whisker-like barbels that help them search for food. They like to eat small things like crayfish, leeches, small fish and insects.

500 Species of Fish Found In Lake Malawi Africa Seen At ...