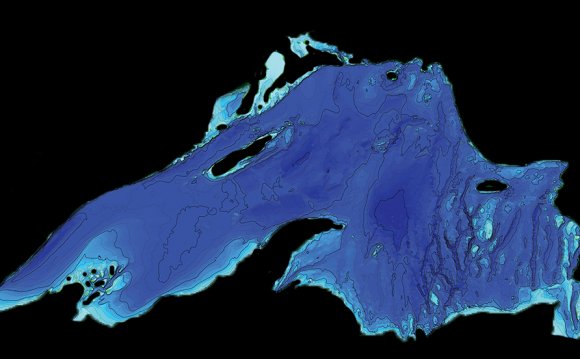 Sprawled across portions of Lake Huron’s seafloor is a microbiogeochemical mystery with deep prehistoric ties.

In Lake Huron near Alpena, Mich., time, groundwater, and bedrock geology (limestone, dolomite, and evaporite) have combined to produce several karst formations in the form of sinkholes and cracks located on the lake floor. Here, dissolved components of the 400-million-year-old Paleozoic bedrock concentrated in the groundwater are venting through the submerged sinkholes onto the lake floor. Hundreds of millions of years ago, the bedrock was a seafloor, and it still contains deposits from the ancient sea’s sulfur and salt, according to Bopi Biddanda from the Annis Water Resources Institute at Grand Valley State University in Muskegon, Mich.

Since the venting groundwater is anoxic and rich in ions (e.g., sulfates and chlorides), it is denser and forms a layer bathing the lake floor; freshwater communities common to the well-oxygenated Great Lakes cannot survive here. Instead, a carpet of microbial mats metabolize the sulfates to sulfides and cyanobacteria photosynthesize the sulfides back to sulfates. Sinkhole microbes are efficiently recycling the sulfur from the venting groundwater, according to GVSU researcher Scott Kendall. On the lake floor’s surface, microbial mats use available sunlight. Deeper into the sinkholes, though, microorganisms must survive using only chemical means, called chemosynthesis.

In some sinkholes, rich, textured, and vibrantly purple benthic microbial mats cover what are sometimes football field-sized areas of the lake bottom. These bizarre ecosystems thrive as little as 66 feet below the surface. Such “extremophile” organisms and the environments in which they live had previously only been discovered in deep-sea hydrothermal vents, cold seeps, and permanently frozen Antarctic lakes. The Lake Huron sinkholes present a unique opportunity to understand the impact of groundwater intrusion into freshwater habitats.

Biddanda and Kendall are part of a research team that has been studying the sinkhole ecosystems since 2003, which also includes Steve Ruberg from the National Oceanic and Atmospheric Administration’s Great Lakes Environmental Research Laboratory. The team believes these microorganism-dominated sinkholes provide a snapshot of our distant past. They are investigating the origins of these ancient groundwater minerals, trying to specify precisely how long ago they were deposited and how rapidly they are flowing into the lake. They also hope to map the gradient of water quality from this prehistoric cauldron of salts and gases inside the sinkholes to the oxygen-rich freshwater above.

A group of archaeologists and explorers from NOAA’s Thunder Bay National Marine Sanctuary in Alpena and Institute for Exploration in Mystic, Conn. found evidence of the sinkholes by accident in 2001 while studying ship- wrecks located offshore from Alpena. They noticed water quality measurements showed unusually high levels of conductivity and called in Biddanda and Ruberg, who discovered the source of the anomaly.

The research team has since utilized divers, ROVs, and a wide variety of sensors and water quality sondes to assess the conditions around, specifically, three submerged sinkholes in the TBNMS. The El Cajon sinkhole, located in Misery Bay, is a small, shallow (one-meter-deep), near- shore spring that receives full sunlight. Then there is the deeper (23-meter-deep) Middle Island sinkhole, which experiences only five percent surface irradiance and spreads across a massive one-hectare area of the lake bottom. Thirdly, a deeper and darker “Isolated Sinkhole” lies in 93 meters of water.

Sensor equipment provided by Fondriest Environmental played a major role in collecting data to characterize these newly discovered ecosystems. YSI 6600 and 6920 multi-parameter sondes collected discreet and continuous time-series data on the water quality of the groundwater and overlying lake water in the sinkholes. Six YSI 6920 sondes were mounted within custom benthic chambers to evaluate microbial mat metabolism by measuring temperature, conductivity, dissolved oxygen, pH, and ORP over 2-3 days. Concurrently, a NexSens SDL500 data logger equipped with a LICOR LI-193 Spherical Quantum Sensor was used to measure PAR. Also, YSI 6600 sondes were used to obtain conductivity measurements at small depth intervals to determine the thickness of the groundwater layer and measure characteristics of the chemocline.

The data from the sondes, along with lab analysis of diver- collected samples, show the venting groundwater exhibits chemistry that significantly differs from the lake’s typical freshwater environment. The groundwater, characterized as water with conductivity ten times greater than lake water, has a lower temperature (7-9 vs. 4-25 degrees Celsius), lower pH (~7.1 vs. 8.3), higher specific conductivity (~2.3 vs. 0.3 mS/cm), and lower concentrations of dissolved oxygen (0-2 vs. 5-11 mg/L) and nitrate than Lake Huron water. High conductivity of venting groundwater is attributed to concentrations of dissolved sulfate (1, 000 mg/L), carbonate, and chloride ions.

The unique ecosystem is dominated by an ancient form of purple-pigmented cyanobacteria composed of independent layers of phototrophic, chemotropic, and heterotrophic microorganisms. Biddanda, Ruberg, and their team suspect the cyanobacteria originate either from dormant spores stored within the ancient underground deposits or are colonized from the similar strains already present in other sinkholes of the Great Lakes.