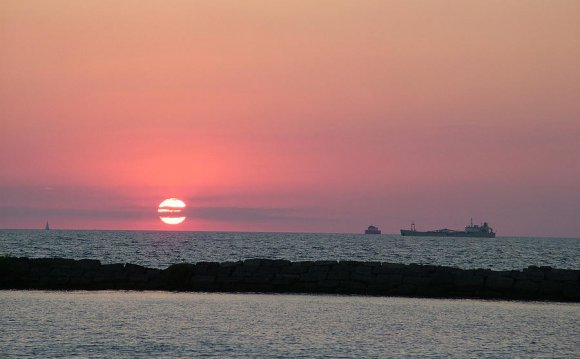 Waves of green are rolling onshore in western Lake Erie as another monster algal bloom grows, fed by nitrogen and phosphorus-rich runoff from the farmlands in Ohio and Indiana.

Scientists have been predicting trouble for western Lake Erie since early July. NOAA’s algal bloom models have been predicting this summer could deliver the most severe bloom in recent years for the lake, “and could become the second most severe behind the record-setting 2011 bloom.” The algae produces a toxin called microcystin that, in early August of last year, reached such critical levels that residents in Toledo were told to not drink their water, even if they boiled it.

“The bloom will be expected to measure 8.7 on the severity index with a range from 8.1 to potentially as high as 9.5, ” NOAA said. “This is more severe than the last year’s 6.5, and may equal or exceed 2013, which had the second worse bloom in this century. The severity index runs from a high of 10, which corresponds to the 2011 bloom, the worst ever observed, to zero. A severity above 5.0 indicates blooms of particular concern.”

The toxic algae feeds off of nutrients that run into Lake Erie from the Maumee River, which snakes through the farmlands of Ohio and Indiana. The runoff from these farms contains nitrogen and phosphorus, which sends the algae in Lake Erie into overdrive. No doubt an extremely wet June and July in the Midwest increased this toxic runoff.

“Research confirmed that in 2011, phosphorus from farm runoff combined with favorable weather and lake conditions to produce a bloom three times larger than previously observed, ” says NASA. “The researchers noted that if land management practices and climate change trends continue, the lake is likely to see more blooms like the 2011 event.”

High resolution satellite imagery from late July showed the green plume of algae spread east of the islands north of Sandusky Bay, with the highest concentrations in the far western portion of the lake, and in southern Lake St. Claire, which connects Erie and Huron.

Making of "The lake series"