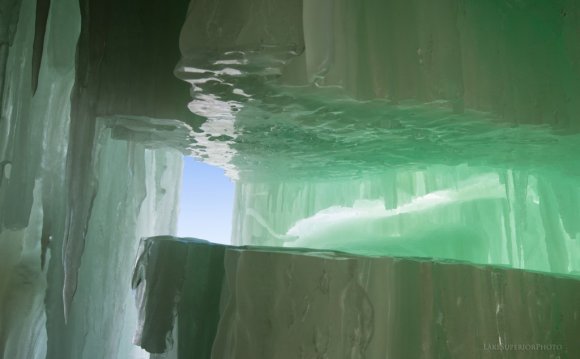 Yesterday I stood on top of a 10 foot frozen wave looking out over the vast icy seascape of Lake Superior. I was shooting footage of this endless field of frozen waves as the setting sun turned them every shade of blue, purple and orange.

It was quiet – incredibly quiet – no car or airplane noise, no voices, and no sound of splashing water, not even the sound of a bird. The audiometers on my camera barely registered a blip and yet there was audio. Even dead silence has a sound.

I’ve been on the Upper Peninsula in the far northern reaches of Michigan, shooting footage for a family biography that I’m working on. I had recorded interviews with my mother’s siblings this past summer while attending a family reunion and I had been planning on returning to capture some winter footage to illustrate the stories they told during the interviews. My mother, her siblings and her parents grew up in northern Michigan during the Depression, farming, lumbering, and fishing – pretty much doing whatever they could to survive. Times were hard and living in such a remote, harsh climate didn’t make it any easier. Everyone did what he or she had to do.

While I’ve been in the UP, I’ve met a lot of people who are doing all types of things to survive during this lousy economy. Most I’ve met have several part time jobs. A couple of times I stopped to eat at a restaurant, there would be one woman tending the bar, waiting on tables and cooking the food. Because of it’s geographic location and its sparse population, the Upper Peninsula is kind of like a frontier and the people who live here, have the spirit to go with it.

As I stood on the top of this frozen wave in absolute silence I contemplated resiliency of the human spirit in the context of my own world. Certainly my business has changed – due to technology and the lousy economy. Because of technology, I am able to do more things than I could ten years ago. Because of the poor economy, I’ve had to do more things. Most other photographers I have talked to this past year have diversified their businesses – some shooting weddings, some shooting video and some working in other retail markets. I suppose we’re all just doing what we can to get through these changing times.

So I looked out over the endless view of frozen waves and into the orange glow of the setting sun. For an instant I became fearful of where I was when I looked behind me and saw a deep crevice that I could easily fall into if I lost my footing. But then I looked ahead to the orange glow on the horizon and I felt hope and with that a sense of security because I knew where I came from and I have the heart and spirit to survive.

Video shows waves of frozen Lake Superior breaking up on ...

US Video: Watch Waves of Frozen Lake Superior in Minnesota