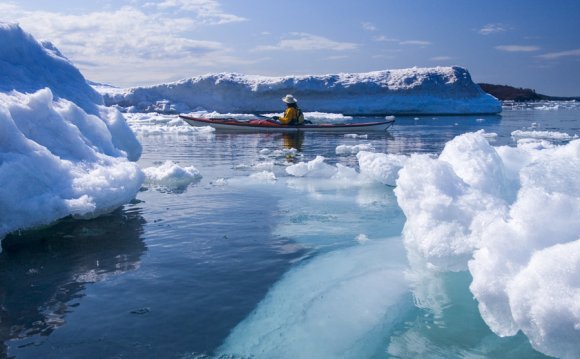 Hell may not freeze over, but experts say Lake Superior could this winter, for the first time this century.

The world's largest freshwater lake was 87.1 percent iced over as of Tuesday, and could soon be virtually covered, thanks to an unrelenting winter in which the mercury has fallen even harder than snow, leaving ice several feet thick in some areas.

"It'll approach 100 percent, but it'll never quite get there, " said Steve Colman, director of University of Minnesota's Large Lakes Observatory in Duluth, Minn. "And it doesn't do that very often."

Colman told FoxNews.com that the region has been "locked into" a brutal cold snap, setting an all-time record for consecutive days below zero. In a typical winter, just 30 percent of the massive lake freezes over, though the icing can range greatly from year to year. Due to smaller pockets of open water, the entire lake is not expected to completely freeze over, he said.

“It’s probably been the toughest winter we’ve had in about 24 years.”

Some 94.7 percent of Lake Superior froze over in 1979, effectively a complete icing. Professor Jay Austin, also of the University of Minnesota's Large Lakes Observatory, said he expects ice coverage to exceed the 20-year-record of 91 percent on the 31, 700-square-mile lake before spring. The average thickness of the ice covering Lake Superior is already 10 inches, according to the National Oceanographic and Atmospheric Administration.

Austin said once the water freezes over, it could stay cold well into summer.

“Typically, the lake will start warming up in late June, but it will be August before we see that this year, ” Jay Austin told CNSNews.com adding that the “extraordinary cold” has led to ice several feet thick in some parts of the lake.

The all-time record for ice coverage of all the Great Lakes is 94.7 percent in 1979. But Lake Superior, the biggest of the five, is typically the last to ice over. In 1994, the last time it came close, 91 percent of its surface iced over. Lake Erie, conversely, is the shallowest of the lakes and freezes nearly every year.

"It certainly has been a while since we've seen this much ice this early, " George Leshkevich, of NOAA's Great Lakes Environmental Research Laboratory, told the St. Paul Pioneer Press.

Forecasters noted that Duluth, Minn., recently experienced 23 consecutive days of subzero temperatures, besting the previous all-time record of 22 days set in 1936 and 1963, according to the National Weather Service.

The Coast Guard is mandated to keep shipping lanes on the Great Lakes open during the 42-week shipping season, which ended last month. This year, the Coast Guard's Great Lakes ice breaker, Mackinaw, worked overtime to cut through the ice for some 57 U.S.-flag vessels that ply the Great Lakes, laden with raw materials such as iron ore and fluxstone for the steel industry, limestone and cement for the construction industry, coal for power generation, as well as salt, sand and grain.

The vessels transport more than 115 million tons of cargo per year, sustain more than 103, 000 jobs and have an economic impact of more than $20 billion, according to the Lake Carriers Association.