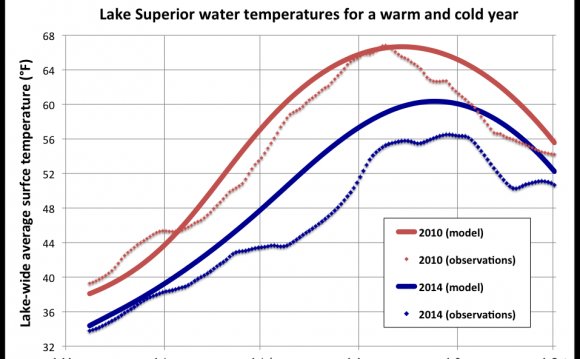 In addition to evaluating the model forecast using maps of satellite-derived surface water temperature, the SLATE modeling team also examined the model’s seasonal evolution of average, lake-wide surface temperatures using data from NOAA’s Great Lakes Environmental Research Laboratory (GLERL). The data/model comparison was done not only for the cold year of 2014, but also for 2010 (a much warmer year). When comparing the model estimates to observed lake-wide temperatures, they found that the SLATE model accurately captured the seasonal timing of lake surface temperature, including much colder temperatures in 2014 and a 2-week delay in the seasonal temperature maximum, compared to 2010 (see Figure 1).

Another way to compare the warm and cold years is to look at the difference in temperature between the two years – what scientists often refer to as “anomalies.” And when looking at the monthly anomalies from the SLATE model (2014 minus 2010), the researchers found a seasonal pattern in lake-wide surface temperature anomalies that looked very similar to the observations (see Figure 2). This included weak temperature anomalies in May and September, but very cold anomalies in July of 2014 (up to 10-14°F colder than 2010).

The researchers also found, however, that the SLATE model appears to have a warm bias, which was particularly evident in late summer of 2010 and most of 2014. “We were a little surprised by this, ” says LimnoTech senior scientist John Lenters. “It basically means that – as cold as our forecast was for 2014 – reality ended up being even colder than we predicted.” Lenters says they have some ideas of where the model can be improved, and they’ll be working on that this coming year.

The early outlook for the 2015 recreation season appears to again be colder than average, but not as extreme as 2014. On March 17, NOAA’s Great Lakes Coastal Forecasting System showed an average ice thickness of around 25 cm on Lake Superior, with 71% of the lake covered in ice (Figure 3). This equates to a total ice volume of around 15 km3, which is a 42% decrease from last year at this time (90% ice coverage; 34 cm average ice thickness).

“Although the total ice volume on Lake Superior in March 2015 is above average, it’s not nearly as high as it was in 2014, ” says Peter Blanken from the University of Colorado-Boulder. “So we’re currently anticipating colder-than-normal water temperatures for 2015, but definitely not as cold as 2014.” A more precise water temperature forecast will be available from the SLATE modeling team sometime in May, after all the ice has melted and buoy-based water temperature observations become available.