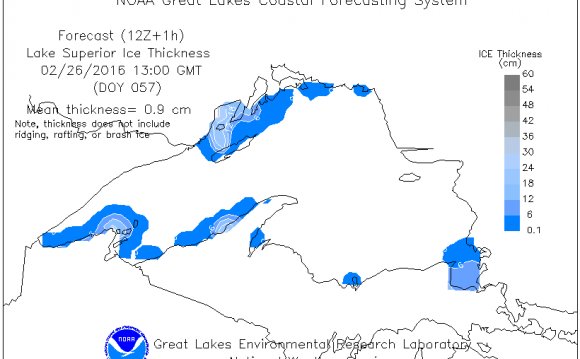 The Great Lakes are under the largest cover of ice in 20 years. The early winter polar vortex that brought in freezing temperatures throughout eastern North America has put an ice cover over about 52 per cent of the Great Lakes.

And that ice cover is expected to continue to expand say scientists, as frigid temperatures keep their grip on the region.

'Right now, we exceed by a good margin what we normally have at this time of the year and we’re also exceeding the average peak for the winter season.' - Denis Dubé, senior ice forecaster with the Canadian Ice Services.

The last time the lakes had this much ice cover this early in the year was during the 1993 - 1994 winter season. Lake Erie, while the southernmost lake, is also shallowest of the lakes. It is virtually locked in ice, with 97 per cent coverage.

“Right now, we exceed by a good margin what we normally have at this time of the year and we’re also exceeding the average peak for the winter season, ” says Denis Dubé, a senior ice forecaster with the Canadian Ice Services.

In fact, the average ice cover for the whole winter for the past 30 years has ranged between 50 and 55 per cent, according to George Leshkevitch, physical scientist with the Great Lakes Environmental Research Laboratory.

New data from Canadian Ice Services as of January 29 shows Lake Ontario currently has the least ice coverage at 23 per cent. Lake Superior, the largest of the Great Lakes, is well over half (65 per cent) covered in ice. Lake Michigan is about 38 percent covered and Lake Huron is almost 67 per cent covered in ice.

The thickness of the ice cover varies from lake to lake but reports show as much as 30 to 40cm of ice spread across most of the lakes, says Dubé.

The amount of ice coverage is significant this year due to how early in the season it formed and the cold snap brought the ice in really fast. “Ice was reported on parts of the Great Lakes in the latter part of November, while usually it starts in mid-December, ” Leshkevitch said.

Dubé says if the freezing temperatures continue, it is possible that we could challenge the absolute maximum ice coverage experienced since 1973.

Meteorological conditions including wind speeds impact ice conditions on the Great Lakes, says Leshkevitch. Powerful winds can break up the ice and push them onto bays and small enclosures causing an ice pile up of up to 10 feet high.

Satellite image of the ice cover on Lake Ontario shores in Hamilton. The image shows a thin layer of ice on the surface of the ice with a new layer of ice about 5cm thick starting to form around the edges. (Image: Canadian Space Agency RADARSAT-2. Annotation: Denis Dubé, Canadian Ice Services)

Dubé says the Canadian coast guards have already had to deal with brash ice and continue to collaborate with the US coast guards to break up ice on the upper lakes. Ships beset in ice will need to be rescued by coast guards and this is costly for shipping companies, says Leshkevitch.

But, it is not all bad news. According to Leshkevitch, the thick ice covering will be great for ice fishing. A stable ice cover is also good for Whitefish spawning beds.