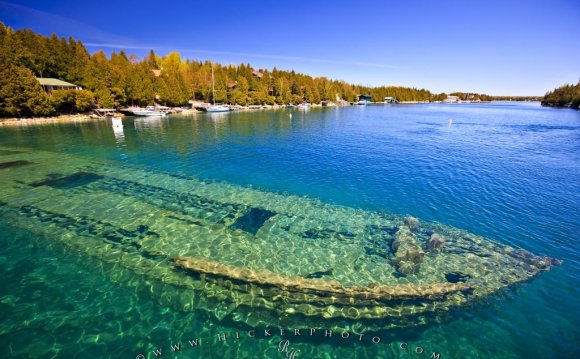 Marine archaeologists are diving deep into Lake Huron's past by creating 3-D images of the many shipwrecks. The vessels are resting far below the surface, and the 3-D images give researchers and the public a far more detailed look at these hidden historical treasures than traditional photos or video can provide.
The researchers have begun mapping shipwrecks in the only freshwater national sanctuary. They are using imaging technology that's getting its first full-fledged, deep-water workout by the National Oceanic and Atmospheric Administration. It manages the 4, 300 square-mile Thunder Bay National Marine Sanctuary with the state of Michigan. They are rapidly creating accurate 3-D images of the sunken vessels by feeding a series of photos into a software program.
Researchers have been photographing and shooting video of the wrecks for years. But until now they lacked the ability to quickly, accurately and cheaply create more illuminating 3-D images, particularly with the limited budget and time they have on dives of at least 130 feet. The new images are a great benefit, allowing them to assess and monitor the wrecks with a precision that can detect even minute changes over time.
"This is the first project we've really rolled it out on, " said Joe Hoyt. He is the diver in charge of the imaging technique known as photogrammetry. "The cool thing about this is it's photo-realistic. But it's also perfect 3-D, so you're seeing all sides of it. And it's perfectly scaled. It's a really amazing, accurate tool for measuring and monitoring. And the biggest benefit is the time it takes to develop is very, very small."
Hoyt and team members recently spent several days aboard the Storm. It is a Great Lakes-based environmental research vessel. The Storm took part in an excursion to eight deep-water dive sites in the sanctuary's expanded territory. The area extends to the maritime border with Canada.
Among the highlights was a trek down to the Defiance, a 110-foot schooner that sunk in 1854 after colliding with the John J. Audubon. One of the sanctuary's earliest wrecks, Defiance sits nearly 200 feet below the surface. It is a few miles off the coast of Presque Isle, a community in Michigan's northeastern Lower Peninsula.
The archaeologists marveled at its "amazing" preservation. Deck hardware and cabins were intact and masts were still standing. It is as if the Defiance could set sail if only it resurfaced. Hoyt described it as "a storybook wreck - what you'd imagine a shipwreck to look like but never is."
It is an ideal test subject for the 3-D imaging technology. It could become standard for analyzing shipwrecks everywhere.
Before donning his wetsuit, tanks and grabbing his camera, Hoyt detailed his image-capturing itinerary with fellow divers and other crewmembers. "My plan is to start up at the bow and (go) at a 45-degree outboard angle, do a total sweep around the entire thing, " he said. "When done, I'll drop down to bottom near the bow and get some of that. Then do sort of an arc down the center line of the whole thing."
"Pay attention to where I am and try not to be in (the shot), " he added.

Hoyt set to work and managed to cover all the ground in under a half-hour. He credited the "well-oiled machine" of the experienced team and great visibility that allowed him to see "all the way across the wreck."
The Defiance was one of three mid-19th century schooners within a few miles of one another that were given the photogrammetry treatment over successive days. The team found the Windiate and Spangler as well-preserved as the Defiance.
Within minutes of returning to the sanctuary's offices, Hoyt went to work on his laptop. He aligned dozens of images, pixel by pixel. He was soon producing rough cuts of the 3-D images.
The new images they are developing will be useful not only for archaeological assessment and monitoring, but also for giving the general public a broader understanding of wrecks that are otherwise inaccessible to everyone but experienced deep divers.
"I could certainly see a large, touch-screen, flat-screen in our exhibit, with a half-dozen shipwrecks to choose from, " said Russ Green. He is a fellow dive-team member as well as the sanctuary's research coordinator and deputy superintendent. Or, he envisions, a 3-D printer as part of a display that "prints out a shipwreck of your choice" while words and images describe it.
"We've done animation and renderings, but this could allow someone to truly explore a shipwreck site, " he said.
The sanctuary protects and monitors roughly 100 known shipwrecks. Its researchers are working to discover and document dozens more in its newly expanded territory. For divers, bringing new imaging-capturing technology into what once was known as "Shipwreck Alley" also moves them into new territory.
"People don't have ... a solid understanding of what the value of these sites are. But (that changes) when you can bring it in a 3-D manner, " said Ryan Bradley, a support diver and graduate student at East Carolina University. "This technology allows average citizens to get a better understanding of maritime heritage. This is America's history. It's still there, it's preserved and it's amazing."