Where is the Great Salt Lake located? 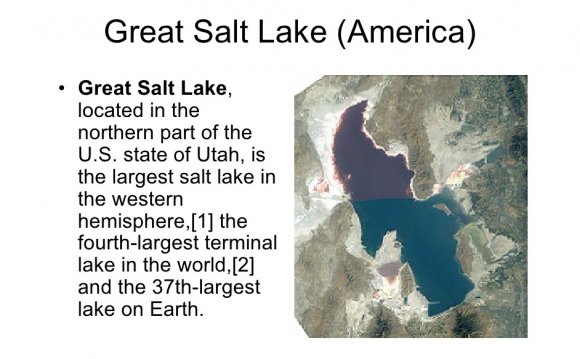 The Great Salt Lake Basin, as mapped, encompasses 89, 000 km2, including much of Utah, parts of southeastern Idaho, southwestern Wyoming and eastern Nevada. The basin includes the rapidly growing Salt Lake City metropolitan area, where the population is expected to increase nearly 50% in the next 20 years. The Utah Water Resources Department predicts a shortfall of 800, 000 acre-ft per year by 2050 for consumptive use in the basin, which will need to be addressed by conservation and new water development.

The Great Salt Lake Basin has a wide diversity of hydrologic and physiographic characteristics that make it ideal for long-term research for a broad spectrum of hydrologic scientists concerned with numerous issues. The basin spans four distinct geologic provinces: the Wasatch Plateau, the Uinta Mountains, the Rocky Mountain thrust belt, and the Basin and Range province. Each has its unique set of bedrock and surficial geologic character that impact the hydrology of the region. Nearly every bedrock type is exposed across the region, and geomorphologic regimes range from high alpine glaciated terrains, mountain valley streams, braided and meandering streams with broad flood plains, alluvial fan complexes, recent lacustrine deposits, freshwater and saline alkaline lakes, sand dune deposits, a variety of mass wasting deposits, and basins that have a range of unconsolidated deposits. Paleoclimate records for each of these regimes have been, or can be determined, providing constraints on the amount of water and temperatures in the recharge regions over the past 10015, 000 years.

Superposed on this hydrologic diversity is a variety of hydrologic uses and demands, from wilderness watersheds to sport fishery management, grazing, logging, mining and oil and gas exploitation, endangered species stabilization, and water consumption for urban and exurban population growth. The Great Salt Lake Basin spans four states, and three of these states are parties to an interstate compact governing the allocation of water from the Bear River. The political and social considerations involved in managing water in the western U.S. are therefore well represented in the Great Salt Lake Basin.

The three major rivers that drain into the Great Salt Lake: the Bear, the Weber, and the Provo/Jordan originate in the western end of the Uinta Mountains, along the eastern edge of the basin at altitudes above 3000m. The many tributaries join and flow through broad valleys and narrow canyons, and emerge from the western side of the Wasatch Range. The Bear and Weber Rivers discharge directly into the Great Salt Lake. The Provo River discharges into Utah Lake, a freshwater lake at the south end of the Great Salt Lake valley. The Jordan River drains from Utah Lake north into the Great Salt Lake. The Bear River is diverted into Bear Lake for storage. A pumping station returns water from Bear Lake to the Bear River where it is used downstream for irrigation and hydropower. A substantial part of the Great Salt Lake basin drainage area is the desert to the west. There are no perennial streams in this area which is separated from the lake by a low topographic divide.

This area does not contribute flow to the lake except from springs in extremely wet years (Lall and Mann, 1995). The figure above depicts the estimated annual discharge for the major streams on the east side of the Great Salt Lake basin. The disposal of precipitation that falls in the Wasatch Mountains is approximately 3040% runoff, 4060% evapotranspiration and sublimation, and 520% regional groundwater recharge (Manning, 2002).

Historic data on the level of the Great Salt Lake has been collected since 1843. The lake level reached a historic high of about 1283.5 m (4212 ft) in 1873 and again in 1986 and 1987, and a historic low of 1277.5 m (4191 ft) in 1963. During the "Dust Bowl" period of drought encountered across the mid-west and western U.S. in the 1930s, the lake was at a level of around 1278.5 m (4195 ft) for a prolonged period. The lake is currently at this 1278.5 m level, a manifestation of the current regional drought. The 1983-86 rise of the lake to 1283.6 m caused flooding and damage to transportation and public utilities infrastructure, including Interstate 80, the Salt Lake International Airport, wastewater treatment facilities, wetlands, bird habitat and tourism. Dilution of the lake salts damaged the minerals and brine shrimp industries. Flood damages during the 1983-86 period were estimated to be $350 million per year. To reduce lake levels and increase evaporative losses, the state created a breach in the railroad causeway that separates the more saline northern arm of the lake from the larger, less saline southern arm, and constructed a $60 million facility to pump water from the lake and circulate it into the West Desert Storage Pond. These expensive measures lowered the elevation of the lake, but also left more than 0.5 billion tons of salt in the desert west of the lake, and affected lake salinity dynamics in unknown ways. The rapid retreat of the lake in 1987 led to severe criticism of the decision to pump.

THE GREAT SALT LAKE IS DRYING UP; the lowest in ITS LONG ...

The Great Salt Lake is drying up.