Lake On The Mountain, Ontario 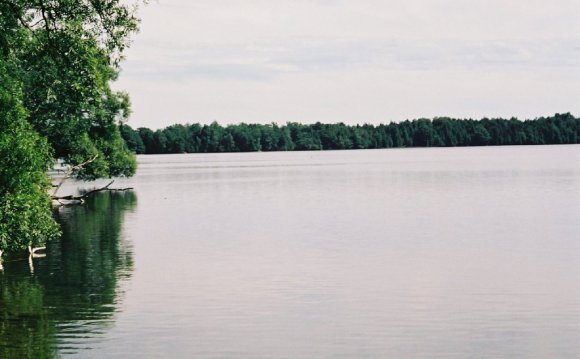 A Mystery Lake, An Idyllic Cove
Photo Credits: Jeffrey Round

Its eerie. Its the kind of place where murder might have been committed. In fact, legend has it that a murderous chase ended here in a double suicide.

Its also stunningly beautiful. Thats why its hard to reconcile the eeriness with the splendour of the view from Lake on the Mountain.

Half-an-hour southwest of Kingston, and two-and-a-half hours northeast of Toronto, the lake was once a sacred native site. Today its a geologic mystery.

Above, the sky opens into a splendid panorama over the Bay of Quinte. Far below, ferries crisscross each others wake as sailboats float like butterflies in the sun. Then you turn and catch a flash of turquoise on the mountain top.

And a voice inside says something is wrong here. How come theres such a difference in water levels? Why doesnt Lake on the Mountain simply drain into the bay far below? Thats when the eeriness sets in.

Despite its brooding character, the site appealed to a group of bone-weary United Empire Loyalists whod left New York following the American Revolution. After an arduous trek through the wilderness, they finally stopped at the lake more than 200 years ago.

As the settlement grew to include a school, a church and highly prosperous grist and lumber mills, the areas renown increased with it. Lake on the Mountain quickly became known as the greatest curiosity in the country.

Common lore had it that the lake was bottomless. Its shores drop off so quickly that one early-19th century boater described it as a deep, dark, frightful abyss.

This would hardly surprise the Mohawk, who believed that three sistersCorn, Squash and Beanslived in its depths. When the daughter of a Mohawk chief eloped with her beau, the pair was hunted down here. Rather than be captured, they committed suicideshe at the waterfall and he by plunging into the lake.

Because the site was sacred the gods condemned the pair to wander the lake for eternity, but the sisters helped them escape. They showed the brave a hole in the lake wall. He broke through and was reunited with his lover.

That same hole once created a torrent of water comparable to Niagara Falls, which only added to the lakes mystery. Despite the fact it had no visible source to replenish it, the water level remained constant.

The waterfall was eventually tamed to give Glenora its economic scope by powering huge wheels to grind wheat and cut lumber. John A. MacDonald lived there for three years while his father operated a grist mill, eventually moving on to lasting fame as the countrys first Prime Minister.

Over time, some of the lakes mysteries have been solved. We now know its 37 metres deep. By comparison, the Bay of Quintes deepest point at Glenora is a mere 17 metres.

Its also known that Lake on the Mountain is fed by underground springs, but their origins remain elusive. An experiment releasing radioactive isotopes into the great lakes suggests that the water comes from Lake Superior, several hundred kilometers to the west.

While most experts agree the lake was formed during the last ice age, there are a number of competing ideas on how it formed. One theory claims it was a ravine cut into the limestone by a retreating glacier; another says it was formed by the rushing movement of melting water.

Natives referred to the lake as a smoking mountain. This suggests it was created by the impact of a meteorite hitting earth or even that its an extinct volcano. The most widely accepted theory, somewhat less glamorous, is that Lake on the Mountain is simply a giant sinkhole.

If you want to see it in person, Lake on the Mountain Resort rents boats as well as cottages. The use of gas motors is forbidden, however, and the only thing to disturb the silence is the wind.

Nearby Prinyer's Cove is another site with a bit of history attached. Seventeen kilometres down County Road 7 from the Lake on the Mountain parking lot, it rivals any beauty spot in Canada.

It's best approached by boat, however, to take full advantage of the view of the cottages lining the hillsides, which range from the enchanting to the magnificent. The only mystery here is why it isn't better known. The answer is because it can't be fully appreciated from the road.

The cove is named for Captain John Prinyer, who effected a daring capture of American soldiers in the War of 1812. Surrounding a larger group with only five men hidden in the bush, he convinced the Americans to surrender or be scalped by the natives, while the woods resounded with imitation war cries.

Whether you arrive by boat or car, the cove is seen in its full glory at sunset. Placid waters mirror the sails of moored boats, while the setting sun silhouettes the cove's western arm through the flushed outline of trees.

As dusk settles over the water, the nearby woods and fields light up with the gentle flicker of fireflies. Even the most imperturbable would be moved by this natural display of perfection.

HOW TO GET TO LAKE ON THE MOUNTAIN
From Toronto, drive east along the 401. Exit south onto the Loyalist Parkway (Hwy. 33) at Trenton. Glenora is 10 km. east of Picton. County Road 7 turns off to the right just before the ferry. From Kingston, follow Highway 33 to the Glenora Ferry.

ADDITIONAL INFORMATION
The Glenora Ferry is part of the provincial highway system, so it's free. The trip across the Bay of Quinte takes about 10 minutes. Boats leave frequently throughout the year, starting at 6 a.m. and running till 1:45 a.m. For park information: For information concerning Lake on the Mountain Resort: phone/fax (613) 476-1321; www.lakeonthemountain.com.

Lake on The Mountain Picton Ontario