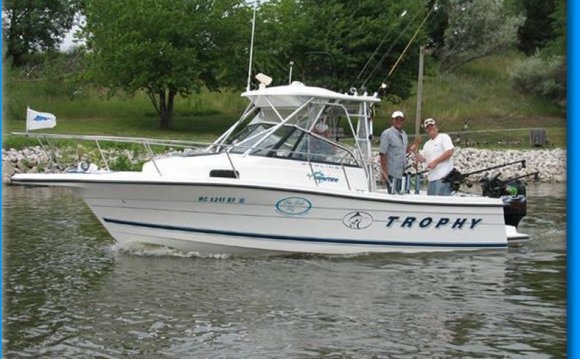 The decline of Lake Huron’s charter fishery is well-documented. From 2002-2011, the number of trips taken from ports along Michigan’s sunrise side dropped by 51 percent. The loss of tourism was devastating for some lakeside communities.

In 2009, I was involved in a charter economics project that calculated a loss of 51, 531 employment hours per year to Lake Huron coastal communities in Michigan. This loss was attributed directly to the drop in charter fishing, but why did fishing effort decline in the first place?

A research paper published in the May issue of Fisheries magazine seeks to provide an answer. Collaborators from Michigan State University Extension, Michigan Sea Grant, Michigan Department of Natural Resources and Chonnam National University used long-term data sets to explore the reasons behind the fall of charter fishing efforts.

Factors such as the rise in gas prices, the economic recession, and trouble in the auto industry have been suggested as potential reasons for the decline in the charter industry. However, the collapse of an invasive baitfish (Alewife) and resulting changes in predatory gamefish usually take the blame.

Chinook Salmon rely heavily on Alewife and nearly disappeared from many areas of the lake when Alewife collapsed. Two other gamefish actually benefitted from the loss of Alewife. Natural reproduction of Lake Trout and Walleye increased when Alewife disappeared.

Unfortunately, neither Lake Trout nor Walleye catch rate had a direct relationship to lake wide charter fishing efforts. Increasing Walleye catch rates actually corresponded to decreasing lake wide effort, which seems very strange when you consider that Walleye are one of the best-eating freshwater fish around.

One exception to this is that one area of Lake Huron (Saginaw Bay) actually experienced big increases in charter fishing while most of the lake suffered. Saginaw Bay now offers charter anglers the highest Walleye catch rates in the state, but even this localized boom in Walleye charters was not enough to offset the loss of Chinook Salmon from a lakewide perspective.