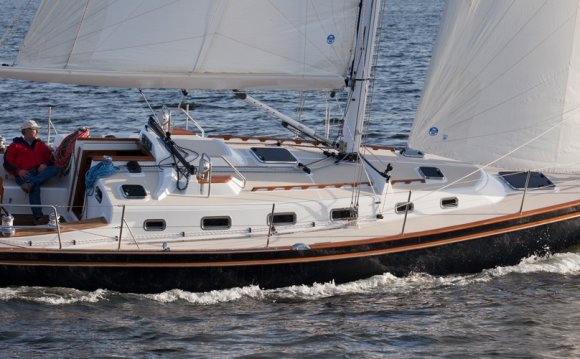 A 20-knot tailwind filled Yemaya’s sails and pushed us east at six knots. Her 27-foot hull rode the waves with ease and we took turns napping and reading between watches. We were sailing along Lake Superior’s “Shipwreck Coast, ” also called the “Graveyard of the Great Lakes, ” a featureless coastline with few places to find protection from frequent storms. As the sun set, we slipped past Whitefish Point, leaving the main body of Lake Superior and the shipwreck coast behind.

During the previous three weeks we had sailed 500 miles across the largest lake in the world and watched Superior’s mood change from a mirror-smooth surface stretching to the horizon to gale force winds and 16-foot seas that let out a deafening roar as they pounded the shoreline. Lake Superior contains roughly three quadrillion gallons of cold, clean water. You could also think of it as 10 percent of the unfrozen fresh water on the Earth’s surface—or even better: enough to cover North and South America in a foot of water.

The thought that we would be leaving the lake in a few hours, bound for Georgian Bay, left me with mixed emotions. As the wind subsided and we were enveloped by the relative protection of Whitefish Bay I was relieved to realize that Superior’s massive fall storms were no longer a threat, but saddened by the thought that we could no longer gaze across a body of water so large that there is no hint of land on the horizon. Superior feels more like a sea than a lake in many ways.

Superior has over 1, 800 miles of shoreline, but there are several spots that really stand out. The north and south shores of Lake Superior are very different. The north shore is dominated by the rugged Canadian Shield, while the south shore has miles of sandy beaches, which are punctuated by sandstone outcrops.

The cliffs and rock arches near Palisade Head and Shovel Point make Minnesota’s Tettegouche State Park a memorable, but often-overlooked destination. A network of hiking trails offer dramatic views of the lake, but kayaks are arguably the best way to experience this stretch of shoreline. Countless storms have worn a series of arches and caves into the 1.1 billion year old rock and when the conditions are calm you can explore several of the arches and caves in sea kayaks. North Shore Expeditions offers sea kayak tours there throughout the summer months.

The south shore contains a host of natural wonders, but Pictured Rocks National Lakeshore is the crown jewel. Pictured Rocks protects 40 miles of wild coastline and offers something for every adventurer, from secluded white sand beaches to some of the best ice climbing in the Midwest. The park is named for the multicolored sandstone cliffs that tower up to 200 feet above the lake’s surface. Water leaches through the porous rock and deposits streaks of every color on a painter’s palette onto the rocks.

We sailed past the Pictured Rocks at dawn and watched the cliffs change colors as the sun rose higher in the sky. Every time I visit I am struck by the beauty of the Pictured Rocks, but then again I experience something new. Every time I venture out onto Lake Superior it usually leaves me with a sense of awe and wonder. After hundreds of days spent exploring its nooks and crannies in boats of all shapes and sizes I am constantly called back to its wild shores and cold, clear waters.

It was almost midnight when we reached the eastern end of Whitefish Bay and sailed down the Saint Mary’s River on our way to Lake Huron. We never really said a proper goodbye to Superior; we were too busy watching for freighters and navigation buoys in the dark. At 1 AM we dropped our anchor in the protected waters of the Saint Mary’s River and quickly fell asleep. Amy and I have entered a new chapter of our journey from the Boundary Waters to Washington D.C., having safely crossed the world’s largest lake, but we know we will return to Superior again soon.

My Sailing Adventure on Lake Superior