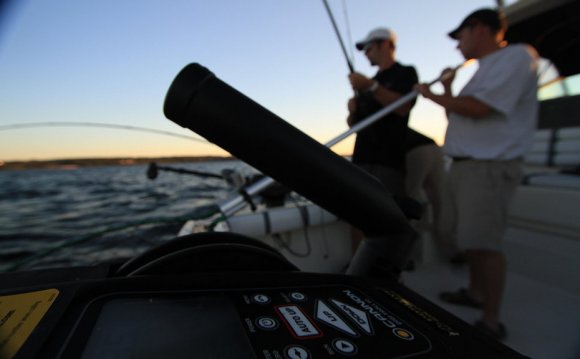 Identification - The interior of the mouth of an Atlantic salmon is entirely white. Adult Atlantic salmon are graceful fish, deepening rearward from a small pointed head to the deepest point under the dorsal fin, then tapering to a slender caudal peduncle which supports a spreading and slightly emarginate caudal fin. Adults have black spots predominantly above the lateral line, although its caudal fin is usually unspotted. Atlantic salmon are distinguished from the Coho salmon because they have fewer than 13 rays in the anal fin. While they mature they take on a silver blue sheen. (see the Atlantic salmon fish cam)

Habits - Each year there are about 20, 000 Atlantic salmon released into the St. Marys River in late May. The fish have been taken in Lake Huron and Lake Michigan. In the 70s Michigan planted some 20, 000 young Atlantic salmon in the AuSable River. Atlantic salmon, (land locked) are long jumpers. Whereas steelhead go skyward, they porpoise like a whale.

Habits - Open-water fishing is the best in spring and summer, as with coho. Migration to parent streams begin in late ummer, with heavy concentration at stream mouths. Stream fishing peaks sometime in September, at the onset of spawning runs.

Habits - In spring and summer, coho can be found in open waters near concentrations of alewives or smelt - usually within 10 miles of shore in the upper 20 to 40 feet. In August and September, they concentrate in schools near mouths of the parent streams. Sometime in September, they begin ascending the spawning streams in waves.

Identification -Color pattern is mostly gray above and white below with creamy white mottling on the back, grading to spots on the side - no red or pink. The tail is distinctly forked.
Habits - Pre-eminently a deep-water and cold-water fish. In spring and during fall spawning season, when water is still very cold, lake trout may be taken in lake edge shallows. They too will run up rivers in the fall, and become quite accessible to anglers below the large dams which block and concentrate the runs. Summer and winter, they are taken by trolling and still fishing or "bobbing" in 50 to 200 feet of water. Large inland lakes near the Great Lakes are also likely sites. Some large lakes, well inland, maintain populations with annual plantings.

Habits - Steelhead spawn in the spring, as early as March, but they begin entering the spawning streams as early as the preceding September. A recently introduced summer-run strain of steelhead may enter the streams in mid-summer. Special early and late seasons are held to take advantage of these runs. Stream fishing is prime in October, November, March and April. In late spring and summer, steelhead can be found in big water - usually within a mile of shore at depths of less than 50 feet.

Identification - This is the little cousin of the walleye and sauger. Like its larger cousins, the perch is excellent eating and a favorite of most people who like fish. Habits -Perch are found throughout the state of Michigan. They are school-running fish and you should drift or troll and try various places and depths of water until you begin to catch them. Many anglers say you should fish from 20 to 50 feet deep to take the bigger perch, and your hook should be held a foot or so off bottom. Spring and fall, perch favor shallow water (4 to 9 feet depth) and will bite all day long. During the rest of the year, they are found in deeper water and bite best in morning and evening. They do not normally feed at night.

Identification -Walleye and sauger are look alike cousins that are members of the perch family. Although they are not exceptional fighters, they excel as table fare.

Habits -These tasty fish are found mainly in large lakes and streams and in many areas of the Great Lakes. Look for submerged bars and deep rock areas close to shore. Fish close to points or river mouths, in shallow water during spring and fall, in deep water during summer. Both species should be fished in early morning, afternoon, evening, and up till midnight. Dark and windy days are also suggested. Night is best in summer. Both are school-running and range widely over a lake.