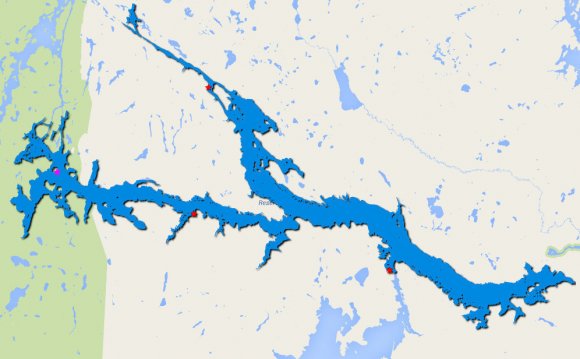 Titan is Saturn's largest moon. It's larger than all other moons in the solar system except Jupiter's Ganymede. Indeed, it's bigger than Mercury. If you read in old (pre-Voyager) books about Titan, you'll see that we used to think Titan was the biggest moon in the solar system, because it wears a thick cloak of an atmosphere that makes it basically impossible to see its surface, at least with un-augmented vision. Titan doesn't give up its secrets easily. This is what it looked like to Voyager 2.

Voyager 2 took the images for this natural color composite on August 23, 1981, as it approached for its flyby of Saturn.

If we had a hard time seeing Titan's surface, at least we could see its atmosphere. And its atmosphere contains something surprising: methane. Now, methane is common in the solar system. Methane is what makes the atmospheres of Uranus and Neptune blue. Methane is in Pluto's atmosphere, and it's frozen to the surface of other big Kuiper belt objects like Eris and Makemake. But compared to these places, Titan is positively balmy and much closer to the Sun.

Methane is made of one carbon atom bonded to four hydrogen atoms. At Titan's distance from the Sun, solar ultraviolet radiation destroys methane rapidly, breaking it into bits - loose hydrogen atoms, and carbons bonded to a couple hydrogens. When these molecule pieces come back together, they don't always rearrange into methane. Carbons stick together, making bigger molecules with more carbons. Then those get broken up, and even bigger pieces stick together. Sometimes they combine with nitrogen from the atmosphere. This is more or less the same process that makes smog on Earth, and is one reason it's so hard to see through Titan's atmosphere. Some of the loose hydrogens combine into molecular hydrogen gas. Physics says the lightweight hydrogen gas should escape Titan entirely. This all happens pretty rapidly; methane is just not stable at Titan, not over the age of the solar system.

So how is there methane still around for us to see it? One possibility is that it's just a freak sudden event that released a bunch of methane into Titan's atmosphere at the moment in the solar system's four-billion-year history that we happened to develop the tools to be able to detect methane on Titan. That's possible, but relatively unlikely. Or, there's a reservoir of methane at the surface or inside Titan that resupplies the atmosphere. At one point, we thought Titan might be covered in a global ocean of methane. ESA even designed the Huygens lander to float, just in case it landed in a methane ocean; we really didn't know what we'd find down there when we launched Cassini in 1997.

When Huygens landed on Titan in 2005, it actually found itself in a dry plain, but one that clearly showed that a fluid had flowed there. It's clear from the shapes of the rocks: they're rounded. These "rocks" are actually composed of water ice; the fluid must have been methane maybe mixed with ethane.

Huygens returned this photo after landing on Titan on January 14, 2005. It has been colorized based upon spectral data. The round objects in this image are pebbles and cobbles composed of ice. The surface is darker than originally expected, consisting of a mixture of water and hydrocarbon ice. There is also evidence of erosion at the base of these objects, indicating possible fluvial activity.

Huygens also clearly demonstrated that fluids flow across Titan's surface, at least sometimes, because there's really no other way you can make branching channels that look like this:

Panorama of the "Shoreline" on Titan

Panorama of the "Shoreline" on Titan, stitched from Huygens DISR Side-Looking and Medium-Resolution Imager raw data.

To flow with liquid, those river valleys must have been filled with methane that came from higher elevations; it had to rain methane on Titan. Rainfall runs off, and then what? It must pool somewhere.

What we learned from the Cassini orbiter at Saturn is that there are lakes on Titan. The first lake was spotted near the south pole by Cassini's camera, peering at Titan in an infrared wavelength invisible to human eyes. It turns out there's only one lake at the south pole.

The footprint-like feature in the upper left corner of this image is Ontario Lacus, a hydrocarbon lake. It is roughly 234 kilometers long by 73 kilometers wide, about the size of Lake Ontario (a lake on the U.S.-Canadian border). The red cross below center identifies the location of Titan's south pole.

But the most dramatic pictures of lakes on Titan came from Cassini's radar instrument. Radar imagers see the landscape differently from cameras. You're looking at a picture of surface roughness. Rocky surfaces are rough, and look bright. Smoother surfaces, like, say, sandy ones - look dark. Liquid surfaces, smooth as glass, look black black black. This is what the radar instrument saw at the north pole.

A Cassini RADAR swath across Titan's north polar regions passed over numerous methane-ethane lakes and river channels that feed them. There is not any evidence that any of the channels were actually running with flowing liquid when Cassini took the image; it's more likely that they are dry washes like those in Earth's deserts, and that they appear dark because a layer of fine sediment is deposited along their bottoms. The data are from flyby T28, April 10, 2007.

The Shores of Kraken Mare

Radar image of Kraken Mare, a sea of liquid methane and ethane on Saturn's moon Titan, as observed by the Cassini spacecraft. The data indicates the depth here exceeds tens of meters. The image covers an area about 270 kilometers wide.

We can now map and name Titan's lakes. The smaller ones are named for similar-sized lakes on Earth. There are 32 named lakes on Titan. All but three of them are near Titan's north pole. There one near Titan's south pole is called Ontario Lacus, named for the lake bordering the U.S. and Canada. They've found two (so far) in Titan's southern temperate regions, named Sionascaig and Urmia for lakes in Scotland and Iran, respectively. There are three big ones, big enough to be called seas or "mare, " named for mythical sea creatures: Kraken, Ligeia, and Punga mare.

Rainfall, river runoff, lakes, evaporation into clouds, rainfall again. Cassini has seen clouds make storms on Titan. We have seen the whole cycle - it's just like Earth's water cycle, but with a completely different substance, and much, much colder.

Since Cassini arrived in 2004, we've learned a lot about Titan and its lakes. For instance, we may be seeing the southern lake district changing over time. And we're still learning. On Monday, I'll be in Houston for a huge annual meeting of planetary scientists called the Lunar and Planetary Science Conference. There's a whole session devoted to the lakes on Titan (PDF). Scientists are figuring out just how much liquid is in the lakes. They're discovering new lakes in northern temperate latitudes. They're finding very low waves on some of the lakes. They're using laboratory experiments to figure out what other stuff is dissolved in the methane and ethane. They're figuring out what happens when lakes evaporate. They're even watching water currents in the lakes, and discovering "mysterious new islands" that seemed to appear out of nowhere. I'll be filing a report after I attend that session, bringing you the latest science from Titan.

The Cassini mission will only last a few more years before it runs out of fuel and ends its life with a plunge into Saturn's atmosphere. These dynamic lakes on Titan are so exciting, it would be wonderful to return to Titan with a dedicated mission to study them more, either from orbit or by actually floating a boat in a lake and letting it drift with the currents. We were close to getting such a mission on the books, but NASA didn't select it for development.

And with the problems in NASA's budget that we're following closely at The Planetary Society, it's looking less and less likely that we're going to follow up on what Cassini discovered at Titan any time soon - not for many decades, at least. If this disturbs you, I hope you'll consider joining The Planetary Society and to tell them that Titan - and the rest of the outer solar system - deserves great new missions that will follow the tradition of discovery that has led from Pioneers, to Voyagers, to Galileo, to Cassini, to Juno.

If your car is brand-new and doesn't have a numberplate yet, tell the company that provides vehicle transport services to you about it. Usually, it is not an issue, but you will still have to provide one full set of keys to your car (which, in case you've just bought it, may also be your only set of keys).