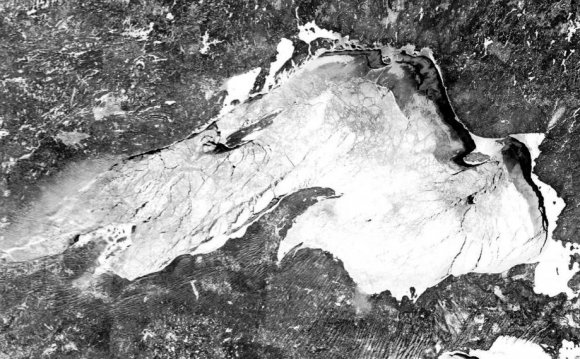 Do you ever wonder where all these awesome satellite images of the frozen Great Lakes come from and where to access them?

With Lake Superior and the Great Lakes set to reach record levels of ice cover this winter, there has been an abundance of satellite images passed around on news and social media sites. However, there hasn’t been much information on where these impressive images came from.

Our curiosity piqued and we set out to do a little research.

Satellite images of the Great Lakes are courtesy of the NASA instrument MODIS, which stands for Moderate-Resolution Imaging Spectroradiometer. Sounds fancy! The instrument is installed on two different satellites orbiting earth.

It was installed on the Terra (from the Latin word meaning Earth) satellite that launched in 1999 and again on the Aqua satellite launched in 2002. These satellites are large components of EOS, the Earth Observation System from NASA.

The program makes long-term global observations of the land surface, biosphere, atmosphere, and oceans of Earth.

Between both MODIS instruments they circle and make an image of the earth every 1 to 2 days, making images in a series of 36 spectral bands.

“These data will improve our understanding of global dynamics and processes occurring on the land, in the oceans, and in the lower atmosphere. MODIS is playing a vital role in the development of validated, global, interactive Earth system models able to predict global change accurately enough to assist policy makers in making sound decisions concerning the protection of our environment.” – NASA

Providing a view of the frozen Great Lakes is just one example of its use. Another specific advantage, relevant to the Upper Peninsula and heavily forested areas, is its role in detection of wildfires, data that is heavily used by the United States Forest Service.

As much as we love space facts, some of the technical specifications are just slightly over our head. Plenty of data, tech specs, and algorithms can be found on the MODIS website.