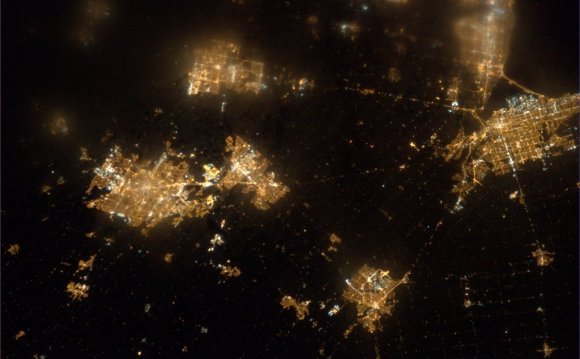 Lake Ontario smallest and most easterly of the Great Lakes of North America. It is bounded on the north by Ontario (Can.) and on the south by New York (U.S.). The lake is roughly elliptical; its major axis, 193 miles (311 km) long, lies nearly east to west, and its greatest width is 53 miles (85 km). The total area of the lake’s drainage basin is 24, 720 square miles (64, 025 square km), exclusive of the lake’s surface area, which is 7, 340 square miles (19, 011 square km). The Niagara River is the main feeder of the lake; others include the Genesee, Oswego, and Black rivers from the south and the Trent River from the north. The 30-mile-wide eastern extremity of the lake is crossed by a chain of five islands, where the lake discharges into the St. Lawrence River near Kingston, Ont. With a mean surface elevation of 243 feet (74 m) above sea level, Lake Ontario has a mean depth of 283 feet (86 m), and its deepest point is 802 feet (244 m). A general surface current (8 miles a day) flows toward the east and is strongest along the south shore. The Welland Canal (navigational) and the Niagara River (natural) serve as connections with Lake Erie to the southwest. Lake Ontario is linked with the New York State Barge Canal at Oswego, N.Y., and with Lake Huron’s Georgian Bay via the Trent Canal at Trenton, Ont. The Rideau Canal runs northeastward in Ontario from Kingston to Ottawa.

Ontario, Lake: view of the Toronto skylineWolfgang KaehlerThe land to the north of Lake Ontario spreads out into broad plains, which are intensively farmed. The Niagara Escarpment, or Lake Ridge, extends eastward along the lake’s southern shore (3 to 8 miles inland) from the Niagara River to Sodus, N.Y. Industry is concentrated around the port cities of Toronto and Hamilton, Ont., and Rochester, N.Y. Other important ports along the lake include Kingston and Oswego, N.Y. The lake freezes only near the land, and its harbours are icebound from mid-December to mid-April.

Lake Ontario was visited by Étienne Brûlé, a French scout, and by Samuel de Champlain in 1615. The Iroquois Indians, allies of the British, held the Ontario region; but during the late 17th and early 18th centuries a temporary peace allowed the French to build forts, including Fort-Frontenac (1673), where Kingston now stands. The French and Indian Wars led to British control, and the American Revolution hastened settlement, trade, and shipping in the region.

Stills from the Tim Lake Area of Algonquin Park, Ontario ...